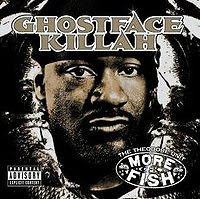 When Ghost dropped a new album a mere nine months after his previous one (and right before Christmas), with a title that, to me read: The Stuff That Wasn't Good Enough to Make it onto Fishscale, I didn't expect much. Again, I was pleasantly surprised. While More Fish doesn't have the cohesive album feel of Fishscale, it's not nearly as thrown-together as I feared it might be. In fact, I ended up liking it quite a bit.

The record's filled with guest spots and features a gaggle of producers, so it does feel a bit like a collection of b-sides (which I think it basically is), but really, it doesn't suffer as a result. Ghost was establishing himself as the hardest-working dude in the rap game, both capable of churning out the songs and delivering quality product.

As usual, I have a bit of beef with a few things here (I never like to see the names Kanye West or Amy Winehouse in my music collection), but again, nothing too major. But I'll never understand Ghost. He's always making with the skits, but the one time he should credit the skit as its own track (the intro on this disc), he doesn't. So, I'm forced to listen to Tracy Morgan (that is him, right?) ramble on before I get to Ghost's sweet reworking of Rakim's "Juice (Know the Ledge)," retitled and re-chorused "Ghost Is Back." Best line: "My guns weigh more, yo, than Gerald Levert." That's some good stuff.

"Guns N' Razors" brings in Trife, Cappadonna, and Killa Sin, all over a sweet cartoon-y beat from MF Doom. A bit dark, and some cool shit. "Good" is an initially catchy song that beats the chorus into the ground, but it's bookended by a couple quality tracks, and it's thankfully not too long. "Pokerface" rides a pretty sweet beat, but as usual, Shawn Wigs drops the ball. Ghost bails him out, and Wigs steps it up a bit on the fantastic "Greedy Bitches," the next track. Redman proves why he's a better guest rapper than he is a solo artist, dropping a trademark fun-filled verse.

Trife Da God solidifies his spot as Ghost's go-to guy, showing up on a bunch of tracks here and always making it work. "Josephine" and "Grew Up Hard" are both a bit sentimental, but Trife runs shit on both, bringing the hardest aspects of the tracks to the surface.

Again, the end of this one falters, though I'm sure a lot of folks would disagree with me on that. The Amy Winehouse track is completely unnecessary, and though Ghost brings things back up with the solid "Alex (Stolen Script)," Shawn Wigs brings it way back down with the horrendous "Gotta Hold On," a space-filler if I've ever heard one. The "Back Like That" remix is hardly a remix, and Kanye West reminds us why he's the most overrated musician of the last twenty years, biting Ghost's raps and fucking them up beyond comprehension. I'm glad this one's at the end, so I don't ever have to hear it.

But the rest of the record is a worthy followup to the tough-to-top Fishscale.

You pretty much nailed this review too. It's funny. The Amy Winehouse song never bugged me because when this came out I had never heard of her. I think it is a fake collaboration as I believe it is just sampled from her song. Right? I really enjoy "Guns N Razors," "Block Rock" and "Jospephine." Low points would be "Gotta Hold On" (so bad), the Kanye song, and "Good." I will always regret Ghost letting Wigs on "Pokerface" as the beat is wonderful. Seriously, he is terrible. I don't get it.