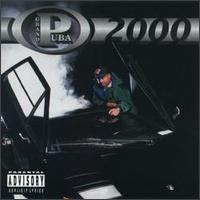 Grand Puba may hold the title of First Rapper to put "2000" in his Album Title. Dude jumped on that train early...

I haven't listened to a lot of Brand Nubian, and this is the only Grand Puba disc I own, so I don't have much to compare it to. I know that I really don't like this album, because it is filled to the brim with slow jams and lots of R&B. He gets six tracks into it before he picks up the pace with the title track, and by that time, it's almost too late. The second half of the album is better than the first, but it's still not great.

'95 was a rough year for the rappers who liked to woo the ladies, and Puba seems out of his element here. And who was posing with a Lamborghini on the cover of their album by the mid-90's? Weird move. You can see where he was trying to go with the soul samples, but they're lazily put together and too sloooow.

But that's me, I like my raps fast. Still, he's got some solid lyrics, especially the ones that aren't pussy-obsessed. It's just a shame there's not more tracks on here that fit those criteria.

"A Little of This"
Posted by Wockenfuss at 3:51 AM