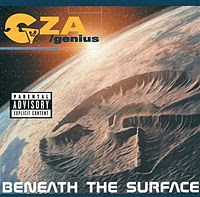 The second round of Wu solo records all suffered from the same problem: not enough (or no) RZA. But, if anyone was going to pull it together on their own, the smart money would have to have been on the Genius.

Utilizing a mix of producers (RZA is only credited on one track, "1112"), GZA managed to put together a followup to Liquid Swords that was nothing to scoff at. Given what he had to live up to, there wasn't a chance he was going to outshine his previous effort. But he gave it a good run, and this ended up being a solid album. However, I do have beef with a few things on here, so let's get those out of the way first.

So while there's 18 tracks on this CD, if you take out the four skits and the intro and outro (another unnecessary fad in hip hop), there's only twelve actual songs. (And by the way, if you have the technology, you should take out those six cuts, because they're all worthless.) I could go on forever about this overused and time-wasting practice. Wait till we get to Method Man's Tical 2000, ugh. Anyway.

The other thing that gets me riled about this disc has nothing to do with the music, and is another one of my top hip hop pet peeves. When you fold open the CD jacket, there's credits on one side, but all the other side says (across four panels, no less) is "GZA/Genius The Fourth Album December '99." Now, this record came out in the summer of '99. Holy shit, we'd only have to wait six months for another GZA record?! Nah, try three years. But thanks for the heads up! This was sooo common in hip hop for so long, and must have driven everyone crazy.

(Note to self: start a blog documenting ads inside of albums for albums that never came out. That would be awesome!)

Alright, so that's what I don't like about this record. Keep in mind, this all hurt doubly bad because it was coming from GZA, who was supposed to be the wise one of the group. (I could do a dissertation on the oh-how-the-mighty-have-fallen aspects of the Wu. I think we'd all like to forget this Inspectah Deck video.) But, like I said, don't load those skits and the embarrassing intro and outro into your iPod, and you've got yourself a strong set of songs.

I didn't really warm up to "Breaker, Breaker" at first, as it sort of felt like Liquid Swords Lite. The strings are there, but they're clean and peppy, not dusty and dark. I've learned to see it for what it is (the single) and get behind it. Killah Priest shows up on a handful of tracks, and brings it. Other Wu members get in on it as well, and as usual, Method Man proves that he is the best one-verse man in the history of rap. While the trademark Wu sound is absent, the flows are still there.

The standout tracks here are "Crash Your Crew" and "Feel Like An Enemy." Ol' Dirty Bastard's guest spot on the former is so drunkenly crazy that it couldn't have been done any better. Pressed up against GZA's meticulous flow, it makes for an oddly hypnotic track. "Feel Like An Enemy" has one of the most menacing beats I've ever heard, and dudes with raps just as menacing. Hell Razah and Killah Priest absolutely own it, and by the time Prodigal Sunn barrels through, you don't think it can get any better, but he slays shit. And then GZA...doesn't show up. Odd.

"Mic Trippin'" may be the only song on the record that really isn't good, but it's tucked away at the end, and it's not terrible. As with any Wu album, fans and obsessives could argue about this one for days. Underrated? Maybe. Depends what you're looking for.

Also: My brother and I saw GZA on this tour and it was probably the best hip hop show I've ever seen. So there's that.

"Breaker, Breaker"
Posted by Wockenfuss at 2:21 AM

That was also the best hip hop show I ever saw. It was put together well with none of the annoying laziness that is prominent in so many hip hop shows. I really like this album. I originally had the cassette so was forced to sit through the skits. I too was baffled with the call to put them two in a row. I remember reading an interview with Gza around this time where he said that he recorded his first verse for "Crash Your Crew" and then went home. When he returned to the studio he found that ODB at some point that night had jumped on the track and done his business. He decided to leave it that way, hence the long outro. I always liked "Breaker, Breaker" and really have a soft spot for "High Price, Small Reward." "Feel Like An Enemy" is another one of those perfect rap songs that I was talking about. You'er right in that every verse somehow gets better (except Trigger who is outclassed) and Prodigal Sunn simply destroys it. "1112" and "Hip Hop Fury" are also pretty solid. I could talk forever about Wu-Tang...