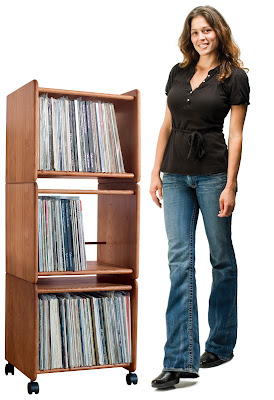 Crap yeah, I'm sticking with this thing. It just goes to show you: I have more drive, determination, and sticktoitiveness than you ever will. Suck it, society.

That shelf up there claims to hold 300 records. While I've done 300 entries, I haven't quite covered 300 albums yet, but pretty close. It doesn't really look all that impressive...or maybe it does. I can't tell. Either way, I think it sounds like a lot. And we're only to the H's. Not even a third of the way done. Yikes. And I think the R-S-T section of the alphabet's going to be a long ride. And if you think I'll be breezing through the Z's, you haven't seen my Zappa collection. But I digress.

Let's see if the stats have made any significant shifts:

That girl showing off the record shelf: Yahtzee.
Posted by Wockenfuss at 2:15 AM