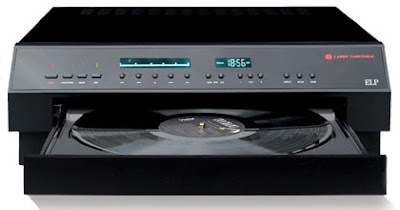 The big 400. Not bad. That break I took was a good move, and now I'm right back in the thick of this damn thing. Let's break down the findings, even though I'm beginning to realize this is only for my personal benefit.

The numbers aren't budging much, but I still think things might sway a little towards vinyl in the coming months. And years.

80's Hip Hop/Rap: Not nearly as strong a showing as I would like to see.

That turntable up there: It plays LPs with a laser and goes for about 15k. Looks like I know what I want for Christmas!
Posted by Wockenfuss at 1:14 AM

The blog is stellar! Everyday when I come home I go here to check out the new review. I usually wait for the weekend to comment as to allow maximum thought and type-age. I can't wait for the Supersuckers entries and the Zappas (you better get collecting!). Also, do you plan a track by track for Wu-Tang Forever? I'll be expecting it.