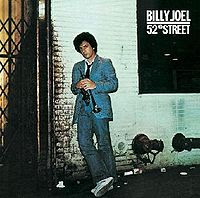 Once Billy Joel hit the pop/rock jackpot with The Stranger, he must have acquired a taste for adulation. 52nd Street is peppier and poppier than his previous LP, and contained almost as many hits.

He wouldn't reach his blatantly-shooting-for-Top-40-hits peak until his next record, but here, he's laying it on pretty thick. He also started to rock a little bit harder. The drums on these tracks are thumping, and the progressions keep moving and don't look back. Maybe that's a good thing, maybe it ain't. He's still got the requisite ballad ("Honesty"), but it's followed by "My Life," which wipes that sensitivity clean. "My Life" is a damn fine pop number, but it's no surprise that it ended up as the theme to a sitcom. It's trying to be backoff-ish and pissed, but it's just too gleeful a track.

"Zanzibar" is Billy in Steely Dan mode, and it somehow ends up working. The second side struggles a little bit, with "Rosalinda's Eyes" basically bringing things to a halt with its craptastic salsa swing. "Half a Mile Away" stacks the horns on top of each other and gets all too bouncy. It's a cute song, but in that forced falsetto sort of way. "Until the Night" feels gratuitous, going on about three minutes longer than it needs to. The title track closes things on a weird note, with Billy trying to recapture the smoky bars of his early career.

Not a bad record, but I always think I like this one more than I really do. Starts strong, but then it loses me on the second side.

And no, Billy Joel doesn't play trumpet on this record. But there sure are three separate photos of him holding one.

"Zanzibar"
Posted by Wockenfuss at 1:32 AM

The cover reminds me of Joe Jackson's "Body And Soul" where he is holding a saxophone? Why have yourself on an album cover with an instrument you don't play? That's an odd choice for me.