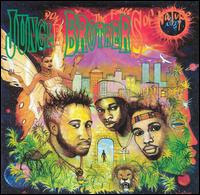 I was crazy into De La Soul in the late 80's, and when I found this disc in a cut-out bin around that time, I was more than ready to get down with the dudes who had dropped some solid verses on De La's "Buddy."

I don't know what it was, but I could never embrace this in the same way I had with 3 Feet High and Rising. It didn't immediately catch me in the same way that De La did, and for whatever reason, I never had the patience to let it sink in. I've been rocking it for the last few days, and I have to say: it still hasn't clicked with me. I've held onto it all these years because I keep telling myself it's going to reveal its brilliance to me at some point. It still may; we'll have to see.

The sounds are solid, but the beats are often too repetitive and the hooks aren't always there. Jungle Brothers were always in their own state of mind, but their old-school group vocals approach almost seems to negate their wackiness to an extent. And compared to De La Soul, it just seemed like more of the same.

I want to love this album; I always have. I'm just still waiting. I've kept it around for this long, so I doubt it's going anywhere.