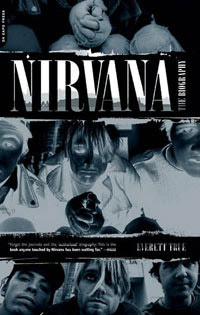 I'm certainly not the most obsessive Nirvana fan on the planet, but I'd say I love the band more than your average enthusiast. I turned 16 at the beginning of 1992, and being in the NW, we felt like we really knew where the band was coming from. I don't want to get into the degree to which the band affected me too much, because there'll be plenty of time for that when we get to their records. But just know this: they were a huge deal to me.

Surprisingly, I never got around to reading Come As You Are, Michael Azzerad's 1993 book about the band. It felt like it came out too soon, and I was wary of it. Whenever a book pops up about a band who's still at the height of their popularity, you can bet it's been thrown together pretty quickly. I've heard that book is good, but I still don't have much of a desire to read it. I did, however, read Heavier Than Heaven, the Kurt Cobain biography by Charles Cross a few years back, and loved it. I'd been eying Everett True's book since its release, but didn't pick it up until I found it dirt cheap at Powell's a couple months ago.

Everett True is an English journalist, and one of the early (like really early) proponents of the band. I think he may have been the first person to do a major magazine review of the "Love Buzz" 7", and he was down with Sub Pop from the get-go. (He's also the guy pushing Kurt in the wheelchair in this notorious photo.) The point is, the dude was there.

He had an on-again, off-again relationship with Kurt and the band, but when it was on, he was on small legs of their tours with them or hanging out with them and seeing shows, etc. So, his perspective is a unique one. While Cross's book was thoroughly researched and very well-documented, True's is less linear, more written from memory, and prone to tangential diatribes that are initially off-putting but ultimately hilarious. The guy's got an ax to grind with everybody, and once I settled into his pissy disposition and rambling writing style, I really enjoyed it. And I had plenty of time: the book is about 650 pages long (there are extensive footnotes throughout, but still).

It didn't feel long, though, and that's always a good sign. True's matter-of-factness makes his stories both easy to believe and somewhat suspect, especially when he directly calls out Cross and sections of his book that he disagrees with. I didn't really care for that, but it's a minor gripe. True doesn't pull any punches when it comes to Courtney Love, and if you need more of a reason to hate her, this book can fuel your fire.

More importantly, it can also give you some real insight into what the guys in the band were going through as their fame expanded by measures that none of them were prepared for. I know it's easy to play the "wah-wah, he's a miserable rock star and everyone loves him" card with Cobain when looking for ways to avoid drumming up sympathy for him, but this book gives a clearer window into the ways Kurt was getting it from all angles. True does a fine job of distilling the chaos of Cobain's pre-suicide months down into a scary reality that, even though it seems far removed now, is still discomforting to read about.

I wouldn't be surprised if some purists have gripes with this book, because it could be polarizing (most things involving Kurt Cobain are), but I thought it was well worth a read.
Posted by Wockenfuss at 2:01 AM