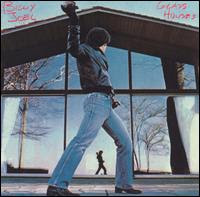 I have a book called The Year In Music: 1979 (Goodwill impulse buy) and as I was leafing through it yesterday, I noticed that the summation of Billy Joel's year was categorized under the "Easy Listening" umbrella. Ouch. For a guy with a boulder-sized chip on his shoulder, this (which I'm sure wasn't an isolated incident) must have irked the shit outta the little guy.

His response? To get rockin'. Glass Houses is the closest Billy ever came to an all-out traditional (read: guitars!) rock 'n' roll record, and I have to admit, he did a good job. While I've grown tired of "You May Be Right" over the years, the rest of the album holds up. "Sometimes A Fantasy" is so over the top with emotional posturing that you can't help but respect the effort. "Don't Ask Me Why" is lilting but not cutesy, and I've always liked it. He was wise to cut it off at the three-minute mark.

"It's Still Rock and Roll to Me" seems forced, but it is what it is. It's one of those tracks that I've heard so many times that I can't even tell if I love it or hate it. "All for Leyna" is cool, if only for using a name that he clearly made up.

Unlike his previous record, this one doesn't puss out on the second side. "I Don't Want To Be Alone" features Joel doing his best Elvis Costello which, whether it was a blatant attempt to gain credibility or not (a lot of this record reeks of that), was a gutsy move. The chorus pushes it, but the song isn't a throwaway. For some reason, "Sleeping With the Television On" is one of my favorite rockers on this LP. It's quick, wordy, and lyrically strange. I dig it.

"C'Était Toi (You Were the One)" slips back into the soft-rockery a little bit, but it's an OK transitional tune. "Close to the Borderline" is another one of my favorites, with Billy sounding like he's singing into a bathtub and affecting some weird new wave (or his approximation of new wave) accent that is loony.

You have to wonder if Billy was going through a McCartney phase, because between "Don't Ask Me Why" and "Through the Long Night," the closer on this record, he's really channeling some pre-Wings Paul. Not often you hear acoustic guitar on a Billy Joel record. Another bold move (by his standards), and another one that, in my opinion, works.

You should read Rolling Stone's review of this record. They do not care for it.

"All for Leyna"
Posted by Wockenfuss at 1:32 AM

Ouch. That review is painful. Do you remember when magazines like Rolling Stone and Spin actually wrote mean reviews about popular artists? I miss those days. This is actually the only Billy Joel album that I own a proper copy of. In high school I heard "Anthony's Song" on the radio and realized that it ruled. I think right after this I found this record at a garage sale for a dollar. I always liked it and remembered feeling ashamed of how much I liked the song "All For Leyna." Your reviews have helped put the album in a proper context for me. You sir, are a stallion.