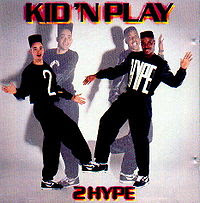 Sometimes you find a CD in the dollar section at the local store, and there's no point in passing it up. It's a measly buck, and you know you're going to rock it at least three times. That's getting your money's worth, right there.

I might actually argue that this CD was a steal for a dollar. I don't remember if I actually had any Kid 'N Play albums when I was a kid (I would have been 12 when this was released), but I know I had some of their tracks on my notorious K-Tel mixtapes. And I dug the shit. Their back-and-forths are fun, the beats are by Hurby Luv Bug (so you know they just scream '88 style in the best way), and the songs usually aren't about much more than how they dope they are, which is the way to do it.

When they stray from the self-aggrandizing, shit gets a bit spotty. "Last Night" is full of forced story raps, and "Soul Man" is majorly embarrassing. As is "Undercover," the slow jam-ish cut with The Real Roxanne. Luckily they make up for it with the fast-dancing-ready "Do the Kid 'N Play Kick Step" and "Do This My Way."

Yeah, none of it's aged particularly well, but it's an interesting reminder that shit like this doesn't exist anymore. And maybe that's why I always get a kick out of listening to these guys try to start a party for 45 minutes straight. If nothing else, their persistence is legendary.