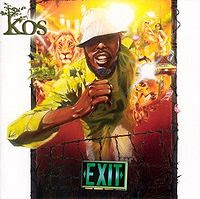 I randomly caught the video for "Superstarr Pt. Zero" from this disc one day (on MTV2?) in 2002 and was intrigued by the rattling jazz samples and oddball drum thumping. Dude also seemed to be a fairly dope rapper, so I remembered the name.

I don't remember picking up the album, but I think I must have found it used shortly thereafter. I haven't listened to it in years, but going back and checking it out now, I remember why I didn't love it as much as I hoped to. It's about half rap (most of which is good) and half neo-soul-ish R&B (most of which is rambly). I don't mind diversity, but when it's juxtaposed so tightly, it can be confusing.

Maybe I needed to be more stoned. k-os has a bit of an irie, otherworldly, and spiritual vibe to his music that just won't click with my ever-present pragmatism. (Case in point: the guy's name is Kevin and he spells it "Kheaven." Ugh.) But I dig his raps for the most part. In a way, he's like will.i.am but better. Not that that's hard to do, but if you've heard his (k-os's) music, you probably know what I mean. The flows are sort of nasally, a bit off-the-cuff sounding, but it's all very precise when you take a step back.

I totally respect the guy's vision; I'm just not sure it's mine.

"Superstarr Pt. Zero"
Posted by Wockenfuss at 1:39 AM