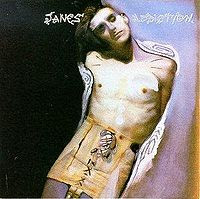 Rarely has a band meant initially so much and eventually so little to me as Jane's Addiction.

Their first three albums are all fantastic, yet since they reunited 12 years ago, I've become completely soured on the whole idea, and especially Perry Farrell. Part of this is due to the fact that I went to see them on their first reunion tour, and it was terrible. They played for less than an hour, did no encore, and seemed to be going through the motions for most of the set. Considering what I paid for the ticket (I don't remember exactly how much, but around 30 bucks) and how far I traveled to see them (two hours), I was left with a bitter taste in my mouth.

I have utter disdain for the subsequent reunions for entirely different reasons, but I don't feel like spiraling downward into that diatribe. But I will say this: the Perry Farrel of the last 15 years or so strikes me as an egomaniac with nothing tangible to back up his own high opinion of himself, save the three great albums he made before the 90's even hit full swing. Hearing him say that the Jane's reunions are about anything other than money betrays the entirety of the characterization he's worked so hard to craft for himself: that of someone who gives a shit about, if nothing else, art. Check your ticket price the next time you go watch these guys lumber through songs that are way past their prime and ask yourself if you feel he's held himself true to any of that.

Wow, I got a little worked up there. But here's why: when you're a teenager and you hear a song like "Pigs In Zen" for the first time, it really gets into you. Jane's Addiction was a band like no other at the time. They dressed glammy/gothy, seemed both strung-out and ready to surf, and didn't sound like anything else that was around at the time. Their disparate influences certainly can account for most of their unlikely chemistry, but there was such an urgency to all of it that you never felt the need to pick it apart. It was just great. And indescribably exciting.

By releasing their first record as a (mostly) live album, they must have intended to replicate some of their rawer energy on wax. It works. This record is as good as the two that follow it, and at times, better. It bears mentioning that they did a fantastic job in sequencing this bad boy. Putting "Trip Away" anywhere else but first would have been a huge mistake, as would relegating "I Would for You" to anywhere but closing out the first side. Also, putting the two cover songs together might seem to be a dicey prospect on paper, but it works really well here for some reason. It almost seems like a momentary diversion; the section where they pay some tribute.

While "Whores" is a great song to follow the opener, it's "Pigs In Zen" that really breaks things wide open. This is better than the version that ended up on Nothing's Shocking, mostly because Farrell sounds more enthused and Dave Navarro's guitar feels terrifically ragged. One of the band's best songs. "1%" and "My Time" seem to be some of the more forgotten Jane's Addiction songs, but they fit into this collection nicely. "Jane Says" was great the first 2500 times I heard it, but I lost interest after that.

"Chip Away" is a clamoring mass of drums and reverb, and is the song I always think of when I see the cover of this record. Probably the weirdest song they ever did, and the "We both wore dirty faces" bit is brilliant. So are Navarro's butt-rawk wankings all over the end of it.

I don't know if this album has aged well or if it just provides me with fond memories of being young and stoned, but it still sounds great to me. It also probably helps that I haven't listened to it in about five years. Whatever works.