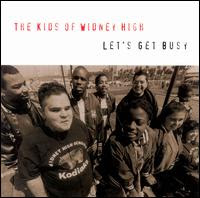 When Mike Patton started the Ipecac label in 1999, I was excited. So excited, in fact, that I decided to collect every album the label released. Of course, I didn't count on their prolific output or their tendency to put out records by bands I couldn't care less about. So, I got through IPC-6, at which time they released a Kid606 record as IPC-7 and I promptly gave up. I'm usually not defeated so easy, but I had looked ahead to their scheduled releases and it wasn't going to get any better.

This is relevant to the album at hand because this CD is IPC-5, sandwiched neatly between the final two parts of the Melvins Trilogy that was released around the same time. If you're not familiar with The Kids of Widney High, you can read about them here. The condensed version for the lazy amongst you: they're a group of mentally challenged students from a special education school in L.A. who write and record songs they have written, with assistance from their educators, who are well-trained musicians.

Mike Patton has long been a fan of the group; in fact, I remember him mentioning them in the late 80's, in a year-end list he put together for Spin (I think) magazine. It's worth mentioning that his adoration for the group appeared devoid of irony - lest you be thinking he's poking fun at them in some way. So, anyone familiar with Patton wasn't too surprised when this was slated as being one of the early Ipecac releases.

The album is, of course, a bit of a novelty, but it makes for a fun listen. Songs like "Pretty Girls" and "Every Girl's My Girlfriend" are the highlights, with their brutally honest assessment of love from afar. There's also some dance-y synth numbers, and even a Christmas track.

Ultimately, I will always remember The Kids of Widney High as the people my brother and I rung in the new millennium with. We had taken a trip to San Francisco to celebrate New Year's Eve 1999 at a show featuring Fantômas, NoMeansNo, the Melvins, and Mr. Bungle. The Kids opened the show, and it was fantastic to watch. Most of the crowd didn't know what to make of it, and the group really had their performance down. It elicited an odd response from the crowd, but nothing rude, thankfully.

After they were done, The Kids ended up out in the audience, milling about as a large group. When Mr. Bungle took the stage as the clock approached midnight, The Kids and their band were all grouped right around my brother and I. The lights went down, we counted in the new year, balloons descended from the rafters, and we spent the first moments of the year 2000 in downtown San Francisco watching The Kids of Widney High blowing on noisemakers and hollering in celebration.

I could have never predicted it in a million years, but it was a great way to usher in the 2000s.

"Pretty Girls"
Posted by Wockenfuss at 1:25 AM