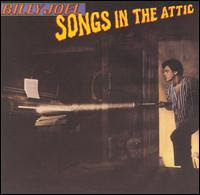 This record was one of the cooler moves of Billy Joel's career.

While a live album is notoriously used as a time-buying option for labels–affording their artist a break to work on a new album while still holding the public's interest–they're usually also packed to the gills with safe and easy songs, rendering it not much more than a greatest hits package in a live format. Billy threw 'em a curveball with this one. It's a live record featuring nothing but deep cuts from his previous records (including the semi-rare Cold Spring Harbor), and it's way better than a hastily-produced collection of his top-ten radio favorites would have been.

Apparently Billy was no longer stoked on some of the album versions of his earlier work, instead preferring the newer arrangements that he and his band had perfected during their constant touring. So, songs like "Streetlife Serenader," which had seemed thorough but timid on LP, rocks substantially more here. And "Captain Jack" makes a lot more sense in a live setting, with the crowd amping Billy up into a much more impassioned performance than the comparatively static one from Piano Man.

This record also contains "She's Got A Way," a song that hadn't been given a fair shot on Cold Spring Harbor, but gets a revival here, for better or for worse. It's a nice ballad, but eh.

The recording's great, and Billy seems lively (if not half in the bag) during the entire thing. Mostly, I just love the idea of this record. Most true fans of a band or musician would much prefer this to a rehashing of the songs that we've all heard too many times. Ah, the early 80's. You'd never see this now. You might see something like it, but you know they'd tack a 14-minute version of "Piano Man" onto the end, just to appease the casual (read: lazy) fans.

Also, I love that this cover (and title) are much more suited towards a b-sides/rarities compilation than a live record. The notes on the back clarify what's included in the LP, but still.