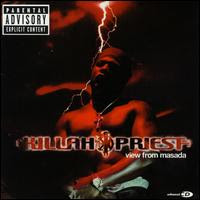 The word on the street was that Killah Priest and the Wu had beef in the period between the release of his debut and this record, and apparently that's supposed to account for why this record isn't nearly as good as his first one.

I'll admit that the beats aren't up to snuff (which can almost be explained by breaking ties with the Wu camp), but it's more than that. Priest himself is responsible for the blandness that runs throughout this one; specifically, he seems to have devolved into what we all thought he despised: a typical rapper. Maybe that's a bit harsh, but given the high bar he set for himself with Heavy Mental, the subject matter here seems all the more low-brow. All of a sudden he's talking about thugs, bitches, and all the stuff that was wonderfully absent from his previous effort.

But that shit doesn't really kick in initially. The first few songs show promise, with the title track and "Hard Times" sounding like solid, but slightly watered-down versions of his usual jams. Things start to fall apart with "Maccabean Revolt," a two-part song that features some lackluster guest spots that completely miss the mark. "Gotta Eat" tries to pick it back up, but the beat is thin and Priest's lyrics aren't there. Never thought I'd hear him talking about "chicks in the club," but there it is.

Ras Kass shows up and so does Canibus, and they both just sound out of place, and Priest sounds out of place next to them, busting more raps about what a real thug he is. There are a few more decent tracks on this one, but it's tough to get the momentum back once the taste's been soured.

"Ladies in the spot looking hot"? Why, Priest, why?

I seem to remember 2000 being a year of Wu let downs for me (aside from "Supreme Clientele") and I also remember counting on this as an album that I know would be worth my money. Boy was I further let down. When Raekwon made a crappy second album I honestly wasn't that shocked. When Rza did the same? Not so shocked. When Killah Priest came out with this? Color me shocked. Here was a guy that I had been championing as having released one of the best Wu albums. He was intelligent and clever. DId he rhyme about hos in the club? Never. Did I ever want him to? No, but that must have been the message he was receiving because this album seems to be a sad attempt to reach a broader market by dumbing himself down and appearing to be, well, average. The beats are a big step down from "Heavy Mental" and while they are not bad there is nothing special about any of them. I actually enjoy "Maccabean Revolt" since it is basically just a rhyming, no chorus song which always floats my boat. "What Part Of The Game" and "View From Masada" are also pretty good songs for me. As for the bad? Did he really need songs called "Gotta Eat," "I'm Wit That," or "LIve By The Gun?" Probably not. I always loved the irony of putting a song called "Rap Legend" on your crummy SECOND album. Maybe a little early on that call...

As a post-script I would say that Priest sunk further down with his next album "Priesthood" before coming back strong with "Black August," which I would say is better than "Masada." I also saw Priest live once and he seemed like a stallion and put on a great show.