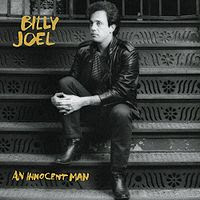 When I get to a point where I own the majority of an artist's catalog, there's something in me that feels the need to complete the collection. This, coupled with the sheer affordability of the purchase, must have been what came over me when I decided to buy this LP. Nothing else could explain why I own this crapfest.

This is one of those records that I bought (I'm sure I paid no more than fifty cents), then upon bringing it home, looked at it and thought "Why in the fuck did I think this had any redeeming qualities?" From the opening tepid funk groove of "Easy Money," I knew I had made a terrible, terrible mistake.

Of course, it also bears mentioning that I would have made an incompetent music exec in the 80's. If Billy Joel would have come to me and asked my thoughts on him paying homage to a bunch of acts that inspired him 25 years earlier by attempting to replicate their sound, I wouldn't have hesitated to tell him that it was career suicide. Needless to say, this album spawned numerous hits and made Joel an even bigger star than he was.

But, it was all at the expense of him assing out in a series of cornball videos and making music that seemed far beneath him. Maybe he just had me fooled with the early shit. Who knows. But your parents loooove this record.

The lesson to be learned here (and I don't think this is my last Billy Joel LP, so clearly I had to learn the really hard way) is that when you're dealing with a artist that has a lengthy catalog, it's ok to only dig a certain era. And that way you can be the cool guy who says things like "Yeah, I like Billy Joel, but only the pre-'83 shit." Or "I only listen to pre-Graffiti Bridge Prince (a good rule of thumb, by the way).

Maybe it was Christie Brinkley that fucked everything up for Billy. He does sound way too happy on this record. And you know that's not good.

"Keeping the Faith"
Posted by Wockenfuss at 2:13 AM