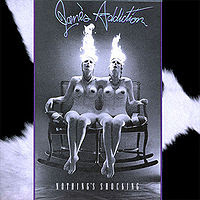 I used to get in fun-but-frustrating arguments with my friends about which Jane's Addiction album is the best. For me, it's between this one and their debut, but in the end, Nothing's Shocking probably takes it. This is Jane's at their peak, crashing in at a time when music like this wasn't being heard anywhere, let alone a major label. This record had to have been more popular two years after in came out than it was when it first hit shelves.

However, my first memory of it (and my first memory of the band) came from one of my friends showing me the cover to this CD (or it may have been the cassette) when I was at a party in 8th grade. That would have been '88 or '89, so I guess some people my age (though they probably had older brothers that hipped 'em to it) were down with this from the onset. I wasn't one of them. I bought this cassette used in 1990 and wore it out. I used to listen to "Summertime Rolls" over and over, because I found it mesmerizing and blissful in a way that only 14 year old can.

But, I also loved "Ted, Just Admit It..." (a harbinger of some of the more bloated tracks on their next LP) and the full-bore force of "Mountain Song" and "Ocean Size." "Standing in the Shower... Thinking" and "Idiots Rule" have, predictably, not aged too well, but "Had a Dad" still brings it. Again, the sequencing here is key. If "Up the Beach" would have been anywhere but first, it would have been a huge mistake. And "Summertime Rolls" does an incredible job of splitting the record in half. Listening to that track now, I remember why I liked it so much: it's the best song on the album, and some of the better lyrics Farrell ever wrote.

I just realized that my LP doesn't include "Pigs in Zen" on it. Guess I never knew that was a CD/cassette-only bonus track. But there you go. So, this one ends with "Thank You Boys...," which actually allows that song to serve its intended purpose in closing out the record. Makes sense.

A lot of Jane's Addiction fanboys will state with unbending fanaticism that "Ritual, bro" is the best album the group ever put together, and they could make a decent case for that argument, but really it's this one. Or at least that's the way I see it right now.

"Mountain Song"
Posted by Wockenfuss at 12:01 AM