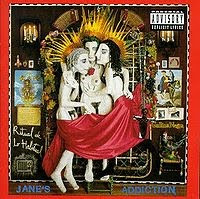 I've been listening to this record for the past few days, and I have to say: I forgot how good it is. I'm still not sure if it edges out Nothing's Shocking, but it's a close call. The band may have been in a drug-fueled netherworld of debauchery, but they managed to pull together some damn solid songs.

Again, the sequencing is dialed in. "Stop" had to be the opener, as it's just too frenetic not to be. A great song, with Farrell sounding as unhinged as ever. "Ain't No Right" is the other fantastic song from the first half of this record, with Stephen Perkins rumbling, tumbling, and never letting his spiral perm get in the way of all-out trap kit assault. "Obvious" and "No One's Leaving" are fine songs, but for some reason they never had much staying power with me. I had a great time listening to them today, but they're not the songs I think of when I think of this record.

The songs that immediately come to mind when I conjure up distant memories of this almost twenty-year-old (!) LP are "Three Days" and "Then She Did...," because I, like everyone else, am a sucker for Jane's at their self-indulgent and sprawling best. I've tried to convince myself that "Three Days" is a bloated wank-off, constructed by a band who was all too eager to believe their own hype, but I can't. It's the best song they ever wrote, and that's the reason why every Jane's fanboy has such a boner for it. It's three songs in one, features Navarro and Perkins going batshit awesome crazy, and also contains some of Farrel's best lyrics. The "All of us with wings" segment is unreal.

"Then She Did..." is just as good, but has the misfortune of coming right after "Three Days," so it seems more timid than it really is. And maybe it's not quite as epic as its predecessor, but it's a deceptively strong song with great lyrics. "Pulled from a headless shell/ That blinked on and off 'hotel'" is a brilliant couple of lines.

I always felt so spent after listening to these two songs in a row that "Of Course" and "Classic Girl" seemed like bonus tracks to me. "Then She Did..." has always struck me as the logical conclusion to this record, but that's probably because I never liked those songs as much and had a habit of skipping them. And they're not bad; they just don't have the same gut-wrenching effect as the two tracks before them.

Oh, and "Been Caught Stealing" is on this record, too. I don't even know what I think of that song anymore. I loved it in high school. And so did you. Don't deny it.

Can anyone pinpoint the exact moment when Dave Navarro went from being a stone cold badass to one of the hugest choads on the planet? It was sometime in between here and One Hot Minute...