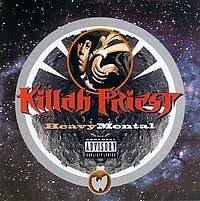 Arms too short to box with God. Indeed.

I hadn't listened to this record in a long time, but I've been rocking it fairly hard for the past few days and I gotta tell you: it's awesome. Killah Priest was one of the first Wu-Affiliates to release a solo record (maybe the first–this came out two weeks before Cappadonna's The Pillage), and the timing couldn't have been more perfect. Priest managed to take the (by this time) well-known Wu philosophies and dig even deeper, shooting off some of the densest rhymes anyone had probably ever heard. While a lot of MCs claim to drop knowledge, KP was bringing shit that was so over everyone's head that you almost had to take his word that it all meant something. The thing was, it all fit together too well for it to be random bullshit.

Priest is clearly a scholar of both African history and religion, and the themes on this record reflect that. Like I said, the rhymes are dense as all get-out. But here's the thing: they're not bogged-down or boring. I have never understood how this record could be so serious and so filled with brutal truths that shouldn't make for casual listening, and so fucking good all at the same time. I've been bumping this (cassette style) in my car for the last half-week, and it makes for some great driving music. I've also been listening to it while dicking around on the computer, and it works for that, too. It's that sort of great.

The key here is the quality of the beats and Priest's knack for writing compelling hooks. Right off the bat with "One Step," he locks in on a solid chorus and uses it brilliantly to bridge the gaps between his streams of wordplay. He uses the same approach on the majority of the remaining tracks, but doesn't fall into a pattern with this approaches.

This is made abundantly clear on the abstractly awesome title track, on which KP drills out line after line over a backing track that isn't much more than swirling loops of buzzy distortion. It really shouldn't work. But it does. His team-up with ODB on "If You Don't Know" shouldn't work either, but it does. And in the end, this whole thing works, front to back. It's not a party record, but if you're looking for some intelligent hip hop with tinges of the glory days of the Wu, it's tough to beat this one.

"Cross My Heart"
Posted by Wockenfuss at 1:53 AM

This is an incredible album simply for the fact that it is 20 tracks in a row of unskippable hip-hop. Try saying that about more than 10 rap albums. This album never bores me and constantly reminds me of why I fell in love with rap in the first place. Incredibly dense and solid rhymes over great beats. What more could you ask for? "One Step," "Tai Chi," "B.I.B.L.E," and "Cross My Heart" are some of the greatest Wu-related songs of all time. Sadly, Priest would not even come close to this calibre of material until "Black August," and even that was a far cry from the sheer genius of this release.