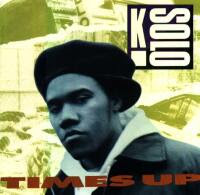 K to the Solo. I have been meaning to buy his debut album for years, but that shit is hard to come up on. Actually, I just looked on eBay and apparently it's not as rare as I thought. Still, I've never seen it in a store. This one, on the other hand, I found for a buck a few years ago. And it was (and still is) well worth it.

K-Solo is what great early-90's hip hop was all about: mad skills laced with intelligence. Does anyone remember when it was cool to be smart in hip hop? That's a whole 'nother discussion, so I won't start on that tangent. But while I'm sitting here listening to lyrically dense and vocally gymnastic "Letterman," it's making me, as I often do, yearn for the glory days. Luckily records like this are still around (even if you have to dig a little to find 'em).

K-Solo doesn't have the most distinct voice, but his flow is rock solid and his intentions are always crystal clear. Dude doesn't waste words, and while he's not over-the-top thuggish, he's got a stiff upper lip that makes it clear he's not to be fucked with. He also holds true the 90's tradition of social commentary in tracks like "Who's Killin' Who?" and "Premonition of a Black Prisoner."

Damn, the more I listen to this record, the more I release how dope it is. Time to scope out that debut.

"Letterman"
Posted by Wockenfuss at 1:05 AM