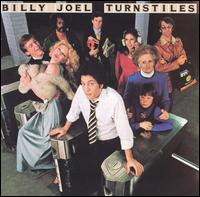 This is the last album Billy Joel would release while still having the luxury of only being mildly famous. His next record would blow everything wide open and make him a household name, for better or for worse.

Speaking of, if I haven't already, let me explain why I enjoy Billy Joel so much. Obviously, his (pre-1983) music is undeniably fantastic. If you choose to be too cool for Billy Joel, that's your business, but you're missing out. He's an angry guy, prone to depression, and the way those aspects of his personality materialize in his music is brilliant. He may be accused of being a better songwriter than lyricist, but I don't think that's fair. As corny as it sounds, there's something to be said for writing from the heart (or the top of the head) and Billy Joel does that as well as anyone. It'll never be cool to like Billy Joel, but that makes it even more fun to like him.

Possibly most intriguing about Billy Joel: the fact that he tried to commit suicide by drinking furniture polish. Furniture fucking polish. And then he lived through it and became one of the most famous popular musicians in history. I think that's fantastic for a number of reasons.

Also fantastic for a number of reasons: this record. If his previous albums had pointed towards his potential and were allowing him to find his voice, this is the one where it all comes together. Turnstiles isn't as instantly mind-blowing as The Stranger, but it's equally compelling.

"Say Goodbye to Hollywood" is a 50's-ish sax-rocker that feigns sincerity but seems ultimately pissed. The strings are a bit much, but the song is rendered huge as a result of the arrangement. "Summer, Highland Falls" is an impressively intricate ballad, a song that has sadly been usurped in popularity by Joel's more radio-friendly slow-and-sensitive numbers. Great lyrics and a great song.

I'm not a huge fan of "All You Wanna Do Is Dance," but maybe that's because I don't care for the island rhythms it uses. "New York State of Mind" makes up for it though, starting small and ending up a giant of a song. "James" is one of many Billy Joel deep cuts that you'll probably never hear on the radio, but it wouldn't be out of place there. "Prelude/Angry Young Man" shows Billy getting gutsy with his songwriting, going nutso with the time signatures and really challenging his band. It's good stuff.

"I've Loved These Days" is a sarcastic ballad that seems like the second part of "Say Goodbye to Hollywood," driving the point (disgust with Hollywood culture) home even further. "Miami 2017 (Seen the Lights Go Out on Broadway)" is the most out-and-out rocking song on the record, a weird futuristic tale of New York meeting its demise. It's heavy compared to the rest of the record, and it makes a solid closer.