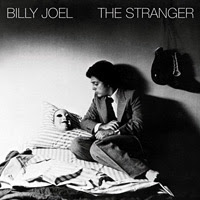 After releasing two records with no major hit singles, Billy Joel went ahead and put out what would end up being a mini-greatest hits album. Say what you want about the The Stranger–it is radio-friendly rock in its purest form, I'll give you that–but these songs are solid.

You know 'em, you love 'em. "Movin' Out (Anthony's Song)" somehow manages to make its "ack-ack-ack" refrain un-annoying, which is impressive in its own right. The title track starts out eerie and ends up running through a groove that sounds more invigorated than anything he had done before. In fact, this whole record sounds more tight and aggressive, filling in holes that were apparently empty in some of his earlier songs.

"Just the Way You Are" is probably loved or loathed depending on who you are, but I've never minded it. I think I just really like the organ tone. "Scenes From An Italian Restaurant" is Billy's "A Day in the Life," and when followed by the near-perfect "Vienna," it's gotta be the the best back-to-back coupling on any of his records. Again, Joel may never be remembered for his lyrics (by critics, at least), but on these two tracks he outdoes himself.

"She's Always a Woman" is a bit schmaltzy for me, but I can see why people get off on it. "Get it Right the First Time" probably gets sorely overlooked on this record because of all the hits that precede it, but it's held up well over the years. Conversely, "Everybody Has a Dream" is just as corny as the title would indicate, though the "Stranger" reprise that footnotes it wraps the album up nicely.

I've been going back and reading old Rolling Stone reviews of Billy Joel's records, and I guess I never realized how maligned he was by critics. They fucking hated him. Part of me gets that. If I would have been a young man when this stuff was being released I'm sure I would have hated it, too. Instead I seem to hold some weird place for ol' Billy in my musical tastes because I grew up not knowing any better and learned to love a lot of these songs before I realized it wasn't "cool." So fuck it. I'm not turning back.

"The Stranger"
Posted by Wockenfuss at 1:43 AM