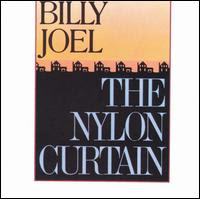 Before Billy Joel decided to egregiously ham it up for MTV and lose all his credibility, he released this, his last truly good record. The Nylon Curtain is arguably Billy at his most serious, with the working man's "Allentown" and the Vietnam epic "Goodnight Saigon" being two of the more notable tracks on this LP.

I've never really cared for either of those songs, but they're both admirable for their sincerity and production value. And everyone seems to like "Allentown" except for me, so that's my cross to bear. Also admirable: Joel's use of the word "fucking" (in a non-sexual context) on the bitter, Lennon-esque "Laura." Way to slip that in there, Bill.

"Pressure" seems to show early signs of "We Didn't Start the Fire" Joel, with its synth propulsions and over-the-top 'tude. Another Billy Joel song that seems to be trying too hard, but ends up equaling safe fun. If nothing else, the structure of the song is an odd one, and it's nice to hear him trying some new shit.

The second side is radio-hit-free, but the tracks are great. "She's Right on Time" is ostensibly a love song, but there seems to be some trouble brewing under the surface. If Billy had a hard-on for the Beatles at this point in his career, he sure didn't hide it very well. "A Room of Our Own" is the precursor to the 50's-rock road that Billy would travel on his next record, but here he sounds more like Beatles-era Lennon than anything else. Thankfully, none of that doo-wop bullshit. Yet.

"Surprises" also channels Lennon, and so does "Scandinavian Skies." What the hey, Billy? I actually think it works, though it's an odd and unexpected turn, especially on the psych-ish flowings of "Scandinavian Skies." One of the weirdest Billy Joel songs ever. "Where's the Orchestra" is Billy's "The Long and Winding Road," and a fitting end to the artistically respectable portion of his career.

It's amazing how different he would sound a year later. Meanwhile, this record remains his most underrated.