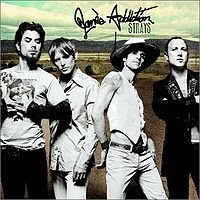 You could tell just by looking at the cover that this was going to be a stinker. So hacky.

I don't remember buying this album, but I'm sure it was the result of holding out some misplaced hope that it was somehow going to be good, or that it would at least manage to recapture a tiny bit of the magic the band had left behind in the studio some 13 years prior. No dice. Listening to this today reminded me why I haven't listened to this CD at all in the last five years: it doesn't sound like Jane's Addiction. I should have known.

The absence of original bassist (and underrated songwriter) Eric Avery was the first tip-off that this might not have much of a shot, but of course he hadn't participated in any of the reunions up to this point, so it wasn't shocking that he didn't step up for this. The slickness of "Just Because," the first single, didn't do much for me at first, but underneath the shit guitar tones were some great melodies. But those guitars...

I almost wonder if the producer is as much to blame for the ass-rockisity of this album as the band is. The guitars are embarrassingly cornball, even by then-current Dave Navarro standards. If they were setting out to make a slick modern rock record, they pulled it off. And maybe that is what they were setting out to do. I just don't know who they thought would like it. I tried, but it made me feel sad and dirty.

So I gave up. But I still have it for some reason. Must be the completist in me.

Rule of thumb: if Entourage wants to use one of your songs for the theme to their show, you've made a serious, serious mistake somewhere. But, it's probably one of Navarro's favorite programs.

"True Nature"
Posted by Wockenfuss at 1:50 AM