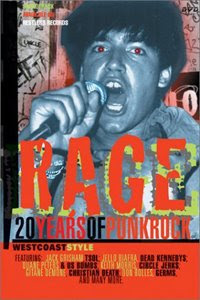 I can't remember exactly what compelled me to stick this in my Netflix queue, but it made its way there, and when it arrived, I was excited to watch it.

I ended up wanting to like it a lot more than I did. It's very low-budget, which doesn't inherently bother me, but they obviously didn't even take the time to remix the audio so the sound was relatively static throughout the movie. This is one of those flicks where you have to keep your volume remote in your hand the entire time, because the levels jump dramatically from segment to segment. A big part of this: the apparent absence of lapel mics. Really? I'm no film director, but this seems fairly standard.

So what you get is an interview from the same dude holding the camera, whose voice is twice as loud as the guy he's interviewing. On top of this, the director who conducts the interviews is the type who insists on finishing the sentences of the people he's interviewing. It's like he's constantly trying to prove his punk cred to the guys he's talking to by letting them know he knows where they're going with their story. Or he'll start telling his own story about a show he saw one time, just (again) to let them know that he's no punk slouch. Extremely irksome and very often annoying.

The interviews with Jack Grisham (TSOL) and Keith Morris (Circle Jerks) are the highlights, but nothing in this film can really be considered linear enough to tell any sort of story. Interviews with Jello Biafra and Don Bolles (Germs) shed a little light into the starting points of the scene, but nothing is made concrete enough to matter. The fact that the movie's only an hour long doesn't help anything, either. Saying that they cover 20 years of punk is entirely misleading. There's barely time to tell the story of how the Germs got together.

So, if you're a big TSOL or Circle Jerks fan, this'll be worth your time because Jack Grisham is hilarious and Keith Morris is nuts as all get-out. Otherwise, it's hard for me to recommend it. The DVD menus are ass, the bumpers in between the segments are cornball, and the whole thing feels like an excuse to try and get some cool stories out of guys who can only vaguely remember what they did in 1979.
Posted by Wockenfuss at 1:34 AM