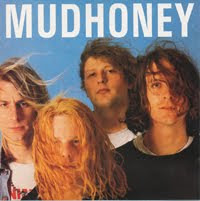 To think, I almost forgot about this, one of my oldest and most prized bootlegs!

Back in the mid-90's, you couldn't get bootlegs from anywhere other than tapes that people kept re-taping for each other, or, if you were lucky, CDs from stores that would dare to sell them. In Salem, we had a few stores that dared to sell them. And while you would think the shoddy quality coupled with the extreme illegalness of these albums would equal a lower price point, it was instead quite the opposite. CDs like this one, with nothing more than a one-panel insert and a hastily printed disc (this one says, simply, "MUD HONEY") cost somewhere in the range of thirty bucks. That amount of dough, to teenage me almost twenty years ago, made the purchase of one of these things a special occasion.

If I recall correctly, my brother got this for me as a gift for my birthday, and I could not have been more stoked. I had been eying it for months, but never had the money to lay down. I was incredibly happy to have it. My copy still has the typewritten (yeah, on an actual typewriter) track listing insert that I made for it, because this thing was so bare-bones that they couldn't even get that together. In fact, in three different cases, one track on the CD actually contains two separate songs. This was annoying if, say, you wanted to hear "Dead Love" - you had to fast-forward through "No End In Sight" to get to it. (Though I don't know why you'd ever ff through that song.)

This is a great live set, capturing Mudhoney at their arguable peak. They run through a lot of shit from Every Good Boy Deserves Fudge, a nice mix of early stuff, and the aforementioned "No End in Sight" is a slightly different version than the one that ended up on Piece of Cake later that year. They also do "Make It Now" and "Living Wreck" from that forthcoming album, so those must have been treats for the audience.

The show wraps up with a scorching version of "In 'N' Out of Grace," after which they come out and do three covers for the encore: "You Stupid Asshole," "Fix Me," and "Hate the Police." Nice move.

The recording is shit, but I couldn't have cared less. And I'm still damn glad I have this thing. It's a keeper.
Posted by Wockenfuss at 2:15 AM

Oh heavens, I used to listen to this in your room when you weren't home all the time. I was just thinking about that typewritten tracklisting and boy that makes me feel old. If I recall, I believe both me and your girlfriend at the time bought this for you for your birthday. What are the odds of that? I remember because I was pissed that you kept hers instead of mine (like it makes a difference). Regardless, having a bootleg of a band like this in our house felt pretty awesome. I listened to this so much that the version of "No End In Sight" on "Piece Of Cake" just never quite could compete with this one. The tracks that contain two songs are crummy and just an odd move. I remember especially loving the 3 song encore. "Hate The Police" has never gotten old for me once. In 18 years. Has it been that long?