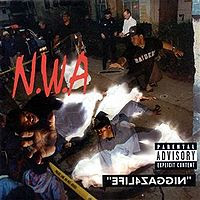 Never has a dude, faced with stepping up and carrying the weight of the world on his shoulders, delivered with such bravado and ferocity. Well, perhaps that's exaggerating a little bit. But you get the idea: MC Ren is borderline untouchable on this LP. He was great before this and he'd be great afterward, but for this one release, he was flawless. Couple that with astounding production from Dr. Dre (I beg you to listen to this album on headphones) and well-placed use of Eazy-E, and you've got yourself one of the greatest gangsta rap albums ever. I have listened to this album at least a thousand times, and I still love it. Yeah, I take years off from it here and there, but I keep coming back to it. And almost twenty years after its release, it still hits.

And it hit initially when it came out, but it fell out of favor pretty quick. 1991 was a weird time. I know I didn't buy this right when it came out, and a year earlier I was shitting my pants at the sight of 100 Miles and Runnin'. Maybe the change in the musical landscape - sorry to use that term - had something to do with it. Maybe everybody really just wanted the exact same shit that they heard on Straight Outta Compton. Maybe some of us grew up a little bit, and all of a sudden listening to songs like "One Less Bitch" around your Tori-Amos-fan girlfriend didn't seem like such a keen idea. I know I didn't play this tape when chicks were around.

I remember someone telling me that it came out, and that it sucked. I remember one of my friends having the tape in his Walkman on a road trip to a baseball game that summer and him telling me I needed to hear some of it, and I didn't really give a shit. I mean, come on, I had heard that it sucked. Then he let me listen to it, and I realized that it did not suck. Then I found a used cassette copy shortly after that and I listened to it in my car when no one was with me. I still have that cassette, and I was listening to it today. It is completely unidentifiable, because all the writing on the tape wore off years ago.

You know what else I remember? Girls thinking that "Automobile" was hilarious. Ugh.

This album is not about "Automobile." This album is about Dr. Dre having something to prove, and him proving the shit out of it. This record is so detailed, so finely tuned, and so calculated that it almost runs the danger of going against the "fuck everything" attitude that N.W.A stood for. The way Dre put a beat together was only part of it. It was also the way he way he positioned rappers (including himself) on the track, playing to their strengths.

He knew when and where to use Eazy-E, and made him way more potent than he ever would have been otherwise. (You ever listened to an Eazy-E solo record that Dre didn't have anything to do with? They're brutal.) And this didn't just mean putting Eazy last. It meant putting him first on "Findum, Fuckum, and Flee." It meant giving him short verses here and there (but not too much) so that you know that he's there, but when he finally busts shit wide open on "Appetite for Destruction," you feel it. It meant not putting him on a bunch of tracks at all.

He also divided the album into two distinct sections. The first half ("Prelude" - "Real Niggaz") is filled with predominantly "gangsta rap"-type songs. The second half ("To Kill A Hooker" - "The Dayz of Wayback") is, aside from the last two cuts, "bitches-and-hos"-type tracks. I thought this sort of held the material back a bit the first few times I heard this record, but I quickly realized it was perfect. The sequencing could have gone a different way, but the album flows really well the way it is. Dre knows how to put together and intro ("Prelude" is great, as far as hip hop intros go), knows how to start strong ("Real Niggaz Don't Die" is huge), and he knows to save the slow, retrospective song till the end ("The Dayz of Wayback"). And he knows to tuck the one awkward track ("Approach to Danger") away towards the end, where it fills a nice transitional slot.

I could go on. This album remains underrated, though I guess that depends on who you talk to. It seems that people either think it's genius or a letdown. I'm in the genius camp.

Also: if you haven't watched the N.W.A on Arsenio clip on YouTube, I highly suggest you do so.
Posted by Wockenfuss at 1:30 AM