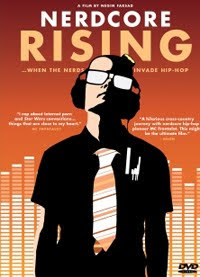 I had this flick sitting in my Netflix queue for months, and for some reason I kept putting off letting it slide into the top spot. I fiddle with my Netflix roster way too much.

Anyway, I finally watched it last week, and though it wasn't exactly what I expected, it was a fun little documentary. For some reason, I thought it would be more of a straightforward documentary about Nerdcore culture - and there was some of that - but it's mostly based around MC Frontalot's first tour, which took place a few years back. The cameras follow the Nerdcore hero and his small band of cohorts from town to town, focusing on every aspect of the tour: the shows, the hotels, the downtime. Mötley Crüe these guys ain't, so it's really interesting to see what some nerds without any of the typical vices spend their time doing on the road. (Spoiler: at one point, Frontalot visits a chiropractor. Wild!)

The guys are all (after they get comfortable on camera) interesting fellows, and though the tour is very short, the footage is paced well and makes for a solid narrative. There's not a whole lot of musical genres that haven't been ruined yet (and even Frontalot is way more well known than he was when this was made), so it's cool to see some guys on the forefront of a previously unexplored movement. Given, it's a small one, but Frontalot's fans are hardcore, and the short interviews with them outside the shows are hilariously nerdtastic.

As with most indie documentaries, I felt like this thing could have been a good half hour longer, and the deleted scenes don't add a whole lot more. But if this is the only Nerdcore doc going (it is, isn't it?), it does its job. But I would still like to see a more thorough exploration of the genre as a whole. Still, definitely worth a Netflix. Queue that shit.

Oh, and Prince Paul is in it, and as usual, he is awesome.

Nerdcore Rising Trailer
Posted by Wockenfuss at 12:59 AM