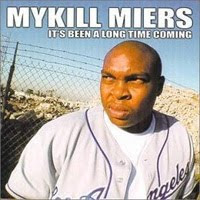 After Freddie Foxxx released his Industry Shakedown LP in 2000, I made it a mission of mine to track down all of the guest spots he had done on other folks' albums. It led me to some weird shit (Black Gangster soundtrack, anyone?), but it also turned me on to some music I may have never heard.

Mykill Miers kind of falls into both of those categories. He's ostensibly a fairly standard battle rapper (at least in regards to his approach), but once you spend some time with his music, you realize he's smarter than a lot of MCs, and willing to work a lot harder. Not that that's weird, necessarily, but it makes him a rarity.

Anyway, Freddie Foxxx does a guest spot on this album, on the track "Wanna Be an MC?," and that's how I ended up hearing him for the first time. I'm pretty sure my brother bought this CD before I had it, but apparently I liked it enough to pick up my own copy. I actually have no idea when I got this, but I have it now, so that's the real point. The other point is that after hearing "Wanna Be an MC?," I wanted to hear more from this dude. And, amazingly, this album did not disappoint in the least. (I always expect to be let down; it makes it easier when it happens.)

Miers doesn't have a terribly distinct voice, and track names like "Doin' My Thang" and "Who Am I?" are strictly Hip Hop 101, but his lyrics easily make up for his nondescript voice and any pandering he pulls in the hooks. His flows are rock-solid, his words never get lazy, and he sounds intense on every track. My kind of hip hop record.

I hadn't listened to this album in years, but I rocked it hard last night and it stands up. A lot of the focus revolves around the title, with Miers talking about where he's been to get where he is. It makes for interesting subject matter, and the dude can make you feel it. That's really all I ask for.

I never owned this, although maybe I bought it for you? Or perhaps I somehow got it through Wherehouse, although that was pretty rare with rap CDs.