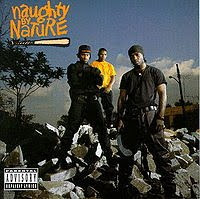 "O.P.P." got played to death by MTV in the summer/fall of 1991, and with good reason: it was a great single. And as annoying as the omnipresence of the video was (especially the "Dave - drop a load on 'em" part), you had to admit: dude could rap. "Dude," we would later find out, was Treach, the cornrowed leader of this Illtown (East Orange in Jersey - act like you know) trio.

I go back and forth with what I think about Treach, but it never has much to do with his abilities as a rapper. The guy's good on the mic. And, though he didn't get a chance to show it on "O.P.P.," so is his partner, Vin Rock. They make for an interesting pairing, but work well playing off each other. Come to think of it, Naughty By Nature used the Soul Assassins formula, didn't they? Treach was the main rapper, Vin was the secondary rapper, and Kay Gee was the man behind the wheels of steel - and the beats.

Naughty By Nature also knew exactly what they were doing. Each of their albums, starting with this one, contains a radio-ready single that strives to be anthemic and is definitely softer than the rest of the record. The goal was big-time MTV play and lots of record sales, and it worked. It's a good move - ask Eminem.

So, other than the playa rhymes of "O.P.P.," the saptastic horn-jammery of "Ghetto Bastard," and the relatively smoothed-out flow of "Rhyme'll Shine On," this album is hard as steel. Tracks like "Yoke the Joker," "Guard Your Grill," and "Every Day All Day" flex hard, and they're dope. But shit really gets going on two of the best cuts on the record, and the ones where Treach really lets loose: "Let the Ho's Go" and "Pin the Tail on the Donkey." Both are upbeat, both are just a little bit gritty, and both feature Treach just wrecking shit. I like it.

I actually didn't buy this album until after I bought the one after this, so this has always sounded like their up-and-comer to me. The recording quality is a little dicey, and the beats are rough. But the raps more than make up for it. And this album will make you miss the days of the hip hop album with twelve five-minute songs. This this is bulky. And that's a great thing.

"Ghetto Bastard"
Posted by Wockenfuss at 12:09 AM

I think I would love this album so much more if I would have heard it before 19 Naughty III. That being said, this always sounds like them working toward that monumental album and not quite being there. Now this is not their first proper album. They released a previous album under the name The New Style (complete with Treach rocking a sweater on the cover) that I stumbled across by accident one day. Imagine my surprise. Needless to say this album is a gigantic leap from that one, and in that context I can see what they were doing. Interesting sidenote: There are various references to "The New Style" on this record, the most notable being the repetition of "The New Style" on "Yoke The Joker." "O.P.P." fascinates me. Yes, it is the famous radio song. But darnit if Treach's rhymes aren't complicated, intricate, and brilliant on it. Oh, the early 90's, how I miss thee. My favorite songs are "Yoke The Joker," "Pin The Tail On The Donkey," and "Let The Ho's Go." I wish Vin Rock was on here more.