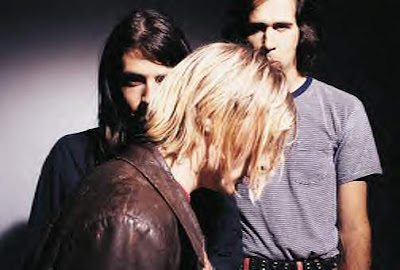 Few things to admit before we dive into the Nirvana catalog. To anyone who knows me, this won't be anything new, but I feel it warrants stating anyway. (Even though I'm pretty sure that only people who know me read this blog.) All right.

I don't hold a special place in my heart for much in life, aside from the usual: family, friends - basically, people and things (and by "things" I mean animals and my record collection, mostly) that I know personally. I'm not normally a sentimental guy. But I've found, over the years, that Nirvana is the one band that I actually feel protective of - the closest thing to a "sacred" musical group that I can imagine. I'd think I was crazy (and I probably am, a little), if I didn't know that so many people feel the exact same way. I think the general consensus on the feeling has dissipated a little as the years since Kurt Cobain's suicide have passed (and as people my age have grown older), but it's definitely still there.

I bought that new Guitar Hero game that all the Nirvana fans were up in arms about toward the end of last year, and I knew going in that Cobain was in the game, and I didn't think it would bother me. But it did. The same way that it bothered a lot of people. Meanwhile, Jimi Hendrix is in that same game (and given the same avatar abilities as Cobain) and no one cares. So what's the difference? It's more recent, sure. But it's also that Kurt Cobain was never supposed to end up in a video game. Or on shoes. Or in a Doc Martens ad. Or as a talking action figure.

This is already going off on a tangent, and that wasn't my intention, so I'm going to reel it in. The point I'm trying to make is this: I am still surprised at how upset I get when I read about these things. But it's simultaneously reassuring, because it reminds me how much the band's music meant to me as a teenager. It still means a lot to me today, but it's all based around my memories of that time, and how exciting it was to be one of the scruffy kids who felt like they were a part of something that was actually making a difference. Looking back, of course, it was all very wide-eyed and semi-naive, but it was supposed to be. I was a teenager, for chrissake.

But the things that I'll defend till the day I die, and the things that I don't think are naive at all, are the tenets and beliefs that were behind the music that Nirvana was making, and the fact that Cobain brought them up whenever and wherever he could. Whether or not he wanted to be famous is irrelevant. He was. And he used what little time he had as the "Spokesperson of a Generation" to promote gay rights, respect for women, and tolerance in general. And while I don't think it ultimately changed the world, it changed me. And I can honestly say that it made homophobia very uncool at my high school. And it made being pro-choice a "duh" decision.

I mean, Motley fucking Crue was topping the charts a few years before this, and Third Eye Blind was a few years later. I've always been glad I was born exactly when I was. There was nothing better than watching those hair metal bands get shit out the bottom of society, and nothing worse than watching bands like Bush try to pick up the pieces after Cobain was gone.

I could go on forever. You get what I'm trying to say. This music means a lot to me. I didn't cry when I found out that Kurt Cobain was dead, but it hit me pretty hard. And while I'm well aware that I'm on my way to becoming one of those "The music was better in my day" old dudes, I will make no apologies for that. Because it was.

So if I start making wild claims about Nirvans's music and their place in history, you should understand why.

Here's a clip of Nirvana playing "Breed" at the Portland Meadows in September of 1992. I was at the show, and it was the only time I saw them live.
Posted by Wockenfuss at 12:31 AM