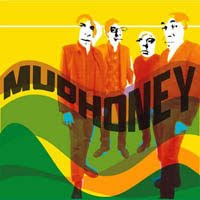 Mudhoney took four years off, got themselves a new bass player, went back to Sub Pop, and released a record that is probably pretty divisive among their hardcore fans. I don't know about anyone else, but I never really expected the band to incorporate horns into their music.

But incorporate they did, and this album ends up being probably the most "mainstream" (it's a relative term here) album the band has made. That is, after you get past the eight-and-a-half minute opener, "Baby, Can You Dig the Light," which features the band going psych-rock a little bit. Not the greatest song they've ever done, but I respect the shit out of putting it first. A gutsy move, to say the least.

I haven't had this record for very long, so I fear that I'm not going to have a ton to say about it. But I've been listening to it fairly steadily for the last few days, and it's growing on me quick. The sound is definitely different, but it's not that different, and if the band was attempting to write catchier tunes (for whatever reason), they pulled it off. "The Straight Life" and "Where the Flavor Is" are both crazy infectious and don't fuck around at all. They're solid little three-minute songs that get the job done.

"In the Winner's Circle" and "Our Time Is Now" both bring the blues vibe back a little, which works, and "Dyin' for It" is a propulsive rocker that follows them nicely. "Inside Job" is another steady track, and it features some gritty guitar work that is tough to deny. "Take It Like a Man" threatens to bring the album to a standstill (it is probably my least favorite Mudhoney song ever), but thankfully it's only two and a half minutes long.

The album is capped off by two long ones: "Crooked and Wide" and "Sonic Infusion." Both sound remarkably like their titles. The latter clocks in at almost eight minutes, making it a nice bookend, along with the opener. Apparently the band was getting into the long jams. It's a weird move, but they pull it off. The song closes things out with chaos, which is a good way to do it.

Like I said, I'm still settling into this one. But it feels pretty damn good so far. And the clear vinyl (you can't title the album that and not press it on translucent wax) is super schweet.

"The Straight Life"
Posted by Wockenfuss at 12:25 AM