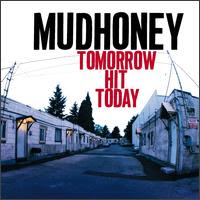 This record marks the end of an era for Mudhoney. Not only is it their last album on a major label, it's also their last record with bassist and founding member Matt Lukin, who, as everyone knows, was the supreme stallion of the band. In fact, I feel terrible for not mentioning him until now. Mudhoney is still going, and they're still great, but they just aren't the same band without Lukin.

But he went out with a bang. This album remains one of Mudhoney's lost gems, a record that has gotten nothing but better with age. I bought this right when it came out, and I'm glad I did. (Not only for the music. The vinyl seems tough to find these days.) This was one of the first records I picked up when I moved to Portland from Eugene, and it was the sort of dark, slightly dreary rock I needed. But it took me a while to come to that conclusion. This record's a creeper. At first, it seems like the band's showing some restraint. The songs aren't as immediately forceful as they had been up to this point. But once you settle in, you realize that the group was experimenting with some new sounds. They might have even been - gasp! - maturing.

But not too much. Tracks like "I Have to Laugh," "Oblivion," and "Poisoned Water" are classic Mudhoney. But "A Thousand Forms of Mind," the album's opener, is in retrospect a real harbinger of where the band was headed. The track's thick, chugging guitar line, accompanied intermittently by organ, builds nicely, eventually breaking into a bridge unlike anything they've ever done before. It's pretty nuts to hear Mark Arm half-rapping, but it absolutely works.

"Try to Be Kind" is structurally a pretty standard Mudhoney track, but the guitars twang a lot more than usual, and the song is loose but groove-y. The album gets more bluesy as it progresses, and it works nicely to let you settle into the sound. The bluesier stuff is also coupled with a more garage-type sound than the band ever really attempted before, which was also one of the things that threw me off initially. (It's amazing how much the effects they use on their guitars can completely change the vibe of a song.)

The album ends with the five-minute-plus epic "Beneath the Valley of the Underdog," and this track in particular is a sign of the band getting into some new shit. It's long, slow, and more sprawling than a lot of their other songs. It took me a while to embrace this one, but I've done it. Same with this whole record. At the time, I wasn't really ready for a Mudhoney "transition" record, but now it makes perfect sense. I've been listening to this record a lot this week, and I'm loving it all over again.

"Poisoned Water" and a few others.
Posted by Wockenfuss at 11:48 PM