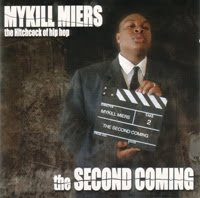 Boom. One year later, another hour of tracks. Didn't I say he was hard-working?

While the vibe on this album is a little different (note that he's now officially calling himself "The Hitchcock of Hip Hop), it's not too far gone from his debut. The beats are more fluid because he uses fewer producers, and while he had six tracks with guest spots on his first album, this one only has one. Clearly the dude was just cranking out songs at this point. Still, they don't sound rushed, so what the hey.

I dig this CD, though maybe not quite as much as his first one. It's darker, and while maybe that's a plus for some folks, it doesn't get to me as much. There's a bit more murder talk (even if a lot of it is metaphorical), and just a general grim vibe that tends to make it slump a little bit.

Still, there's a lot to like here. Miers, just like Freddie Foxxx, doesn't fuck around. The dude gets on a beat and just straight raps. And even back when this was released, that was becoming a lost art. I'll always love to hear a dude just get on the mic and blow through four verses in four minutes. And this album is great for that.

I need to check out some of his newer stuff...

"The Second Coming"
Posted by Wockenfuss at 1:41 AM