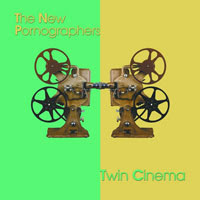 I think I said that Electric Version is my favorite New Pornographers record, and I'll probably stand by that. But it's not by much. This one is great as well, though a little more smoothed-out, which drops it a notch for me towards the end.

Still, it's not till the last two tracks that this one starts to slip, so really, I shouldn't complain. And I won't. So, this record doesn't sound vastly different than their previous stuff, but there's a slight jump in the production quality that's noticeable, and that's not a bad thing. There's a lot going on with this group's songs, and it's great to be able to hear all of it.

The title track is possibly the best song on the album, and while I might say that they blew their load by putting it first, it stomps in so authoritatively that it shouldn't be anywhere else. And the songs that follow it, while maybe not quite as forceful, are nearly as good. "The Bones of an Idol" is mad pretty, and "Use It" is ridiculously catchy. "The Bleeding Heart Show" is the song of this record that, even if you don't realize it, you probably know. It's been used in a few prominent commercials - or at least one section of it has - and is, not surprisingly, ultra-catchy as well.

The whole damn thing is. I've been listening to this album for the past few days and I'm really starting to regret not buying their LP that came after this one. There's still time, people. I'm going to make it happen.

Also: I saw them on this tour and it was good.

Also: They have a new record coming out in a few months.

Also: If you need some new music to get into and don't feel like struggling through anything, I would recommend these guys. They'll suck you in quick.