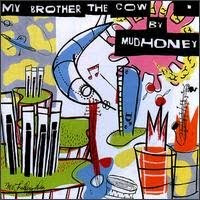 When Mark Arm says he's at the end of his rope in the opener, "Judgement, Rage, Retribution, and Thyme," he sounds pretty believable. By the end of the first verse of "Generation Spokesmodel," you can tell he means it. "Into Yer Shtik," with its "Why don't you blow your brains out?" appeal, seals the deal. This is Mudhoney in the aftermath of Seattle, standing on the ashes of grunge, and trying to navigate the post-Cobain musical world. And they're not stoked about it. And it's great.

1995 was an awkward year for rock music, with bands like Mudhoney still signed to major labels (this record was released on Reprise), but with interest among the public waning. I have to admit: I didn't even hear this record until a few years after its release. It still grips me as the Mudhoney post-war album, the weird one that finds them trying to pick up the pieces of what the fuck happened to them in the early part of the decade. Again, you can't blame them for being pissed. And this record, in parts, is a venting of all those frustrations. Which shouldn't overshadow the fact that it's filled with some of the band's most unique - and strangest - songs.

"In My Finest Suit" is dark and dreary, a song that almost sounds like it could have been on one of their first records. It leads right into "F.D.K. (Fearless Doctor Killers)," which, unless I'm missing the point, is one of the most socially aware songs the band's ever done. "Orange Ball-Peen Hammer" is a mashed mix of slide guitars and blues-rock, and ends up being a damn cool song.

But the real jam here might be "Execution Style," one of the more "Classic Mudhoney"-sounding songs. It's angry, of course, and also a bit sloppy. And mixed in with all the other styles they tackle on this record, it makes even more sense somehow.

"1995" is the big closer here, and the way it gets dragged out at the end is fantastic. It's a fine ending to a fine album, and another one that remains sorely underrated. Never has the band been so bitter and so willing to focus that ire. I'll take it.

"Generation Spokesmodel"
Posted by Wockenfuss at 1:10 AM

I'll never forget seeing them "Judgement, Rage, Retribution, and Thyme" live on a late night show (maybe Conan?) and knowing that their ride with fame was close to over. They just seemed out of place on such a big show. I bought the crap out of this when it came out and remember not loving it immediately like I had their previous albums. Part of this may have been due to the fact that I was a few years older and had moved onto other things musically. I'm pretty sure I was heavy into punk at the time but still loved Mudhoney enough to buy their album. Also, a few years had passed between albums and "My Brother The Cow" did not seem like a long-awaited masterpiece, but more like an awkward contract-obligator. Over the years I have actually grown to like this much more than I used to. Side 1 is especially strong and finds the band going back to their DGF style that they somewhat abandoned on "Piece Of Cake." "FDK," "Into Your Schtick," "Today, Is A Good Day," and "Execution Style" are all classic Mudhoney tunes. I've always been curious about that album title...