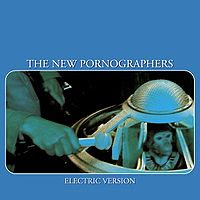 What a fine record this is.

I first got into The New Pornographers via this clip for "The Slow Descent into Alcoholism," from their first record, Mass Romantic. This was years ago. I used to have a dubbed copy of that album, but never took the time to buy a proper one. So that's why we're starting here, with their second one. Anyway, I loved that song, and I still do. They were another one of those bands that I kept reading about, and it sounded like it might be something up my alley. I was delighted to find out that it was.

This LP is my favorite record of theirs, though I'm ashamed to admit I never bought Challengers, their most recent one. Not sure why. I still see it in the record stores, and I just haven't picked it up yet. I go through phases with this band, and I guess I haven't been paying them a whole lot of mind in the recent past.

Still, Electric Version is always nice to come back to. It's hard to nail down the Pornographers' sound, but they've managed to craft a fairly distinct one. They've got multiple vocalists, a whole lot of folks in the band, and they make use of all of it. The first three cuts on this record are incredible, and really, so is the rest of it. "The Laws Have Changed" is one of the finer pop-rockers in recent memory. And that's really the deal with this whole album. It's just really catchy. So if you're in the mood for hooky melodies, this is a great place to go.

The band has a new record coming out soon. I feel a New Pornographers phase coming on. I'm going to embrace it.

"The Laws Have Changed"
Posted by Wockenfuss at 1:51 AM