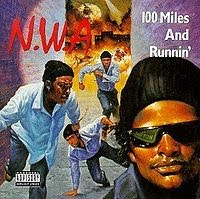 I was with my dad on a motorcycle ride to who-knows-where in the summer of 1990, when I begged him to let me stop at a Tower Records that we passed by. As I've said before, we never knew when new records were going to come out, so all you could do was check the racks. I had a list of artists I always looked for when I made it out to record stores, and N.W.A was on it. That day, my usually fruitless checking paid off. New music from Dre, Yella, Ren, Eazy, and... where the fuck was Cube?

When I got home and listened to the tape, a few things were made clear to me: 1.) Cube was indeed gone, and they were now referring to him as "Benedict Arnold." 2.) The title track was one of the greatest songs I had ever heard in my life. 3.) Their love for pussy had graduated to pornographic levels. (Not sure I ever wanted to actually hear Eazy-E getting his dick sucked.) 4.) This was a tide-the-fans-over-till-the-album-drops release, and it absolutely worked to both satisfy my cravings for new music and get me salivating for the full-length.

Even in this short format, it became clear that N.W.A was not looking to crank out Straight Outta Compton Part II. The production was much more dense, the rhymes were much more developed, and the entire feel of the EP was just bigger. It took me a few listens to adjust, but once I did, I was completely on board. The title track was a surge, the perfect cut to declare their intentions to keep on going without Cube. MC Ren was clearly making it his mission to take over as lyrical leader of the group, and all his appearances on this EP made a solid case for that.

"Just Don't Bite It" took the bitches-and-hos approach to an uncomfortable level, again showing that the group was pushing things forward. Musically, it's a great song, but the title track and "Sa Prize, Pt. 2" (which is actually "Fuck tha Police, Pt. 2") both run circles around it. "Sa Prize" is everything that's great about N.W.A, and Ren's verse on the song is untouchable. "Real Niggaz," which is the only cut here that would end up on the next LP, is another great one, with all three vocalists dropping fast-as-fuck lyrics and trading verses smoothly.

"Kamurshol" is basically an announcement for their upcoming full-length, and when they announced the title, it just sounded like some backward-masked garbling. This would later make sense, but for the year between this and their next release, it annoyed the shit out of me.

I always thought that I dug this EP a little more than some folks I played it for. I think some people really didn't want anything more than a continuation of the group's previous effort. This was far from it, and it was brilliant. Still is.