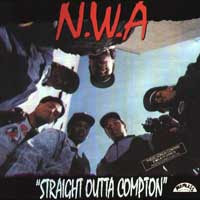 I meant to come up with a copy of N.W.A. and the Posse before I got to the N's, but they crept up on me and I couldn't find an eBay auction to my liking. So, we're sadly skipping that one. But really, this is a fine place to start.

When people talk about this record blowing up without the aid of television or radio play, they're not kidding. Though the group would eventually get their "Express Yourself" video in minor rotation on MTV, prior to that, it was strictly word of mouth. In 1988, that was unheard of. But that's exactly how it happened. Somebody at my school (junior high, which was a perfect time for this to come out) had a copy, and pretty soon everybody needed to hear it. It wasn't that we hadn't heard dirty rap before - Too $hort and Ice-T had already made the rounds - but we hadn't heard dirty rap like this.

Parents always assumed that kids listened to N.W.A because it was swear-filled, violent, and generally raunchy. And while that was certainly part of it, I know none of us would have listened to it so damn much if the music itself wasn't so great to begin with. Too $hort swore a lot, and though I tried, I could never get into him. Same with Ice-T. This kid at my school would always recite T's track "Colors" to us (from the film of the same name), and it intrigued me until I heard the song. Then I didn't give a shit about it, because it wasn't particularly good. This kid, the kid who was singing it all the time, he would listen to any rap music that had swearing in it. And he had terrible taste in music. He just had negligent parents that would let him buy (and listen to freely) anything he wanted, so he was our sad source for 2 Live Crew dubs, which I liked about as much as Too $hort, maybe a little more. (I only listened to 2 Live Crew because they were hands-down the dirtiest group ever. Might still be. And that is the only thing they'll ever be famous for.)

The rest of our parents weren't so lazy or oblivious, so purchasing an actual copy of an N.W.A or Eazy-E cassette (Eazy's Eazy-Duz-It was released at roughly the same time) was a struggle. Holding onto it, hiding it, and finding a place to listen to it were the struggles waiting for you after you got your hands on a copy. Parents loved to take these tapes away, and plenty of us got busted with our copies of Straight Outta Compton. I never listened to my copy (purchased while I was shopping with my girlfriend's parents, who were clueless) without headphones on, but my mom found mine somehow anyway. Eight bucks down the drain. I promptly bought it again.

The stories of getting caught with your N.W.A tape made the rounds at school. While most weren't very interesting (mine certainly wasn't, but it was embarrassing), my best friend had the pleasure of his mom opening his bedroom door right as Ice Cube was revving shit up on the remix of "Dopeman." The first words she heard were "If your girl kneels down and sucks my dick." She just put her hand out, he ejected the tape and placed it in her palm, and it was gone. He bought it again, too.

While any stable-minded kid of 12 or 13 certainly knew that these guys weren't actually killing people, hearing them talk about the 'hood they grew up in - a place none of us had even heard of previous to this - was infatuating. But, like I said, I didn't really buy that they were hardened criminals. They were too young and too smart. Drug dealing? Maybe. Bitch-fucking? Sure. But cap-peeling? Nah. And it didn't matter. They knew how to talk the talk, and that was good enough for us. I would tell anyone who would listen that these guys were reporting from the streets, and we had a right to hear about reality. Because to me, from the way they told it, it sounded really fucking real.

But it wasn't just that. It was Cube's lyrics, his delivery, and the way that you somehow just knew he was the leader. It was MC Ren busting shit out on the solo creep on two "clean" songs ("If It Ain't Ruff" & "Quiet On tha Set"), trying to out-rhyme the rest of the group and arguably pulling it off. It was the way Dr. Dre knew just where to put Eazy-E (last) so he had the most impact. It's the way Dre fooled the world into thinking Eazy could rap. It's the way he used live drums and a funky-ass bass line to dial in one of the greatest posse cuts of all time, "Parental Discretion Iz Advised." It was the way Dre sequenced the album so you could listen to it all the way through, every single time. (Well, maybe you'd skip "Something 2 Dance 2," but that's at the end.)

I could ramble on about this album forever, but I don't really need to. Everyone knows all these songs; you know how great they are. I wonder if kids still listen to this record, or if it sounds completely ridiculous now? I can't even tell if it's aged well, because it's so far driven into my brain that I have no perspective on it. I could still recite almost all the lyrics to this album. Give me one day with it, I guarantee you I could re-learn "Quiet On tha Set."

I don't listen to this record much anymore, but it's nice to know it's there. I have the 2002 reissue on double-vinyl, and while it adds a few remixes with a few bonus bars of lyrics, they're not especially notable. I still need to get an original copy. It's on my list.

"Straight Outta Compton"
Posted by Wockenfuss at 1:14 AM

Every time I hear this album it reminds me of grade school. Is that sad? I don't think so. Of course I hope my 10 year old never hears this. I'll never forget counting the f words in "Fuck The Police" (it's something crazy like 85) and telling all the kids at school about it. As I've gotten older this album has aged shockingly well. But as you brought up I wonder if that is just because I remember how mindblowing it was at the time. I remember being utterly fascinated by the world that these guys were living in. It was like finding out about a whole new planet that was only one state away from mine. Oh, and Ice Cube? I was legitimately afraid of him as a kid. Seriously. I was convinced that he would beat me to death on sight. He was that intense. Ironic now seeing as how he makes kid movies. Do you know what has not aged well for me? Eazy-E. He's like the Ultimate Warrior of rap. Everyone I knew at the time (including me) thought he was the absolute coolest thing ever. Now? Not so much. I don't hate Eazy, it's just that in my older age I don't find the things he says half as hilarious. Meanwhile, MC Ren and Cube's rhymes are still as powerful to me now as they were 22 years ago. I remember the actual song "Straight Outta Compton" being so awesome that I would rewind it and listen to it over and over again. I couldn't believe how awesome it was. Still cant. Awesome review by the way.