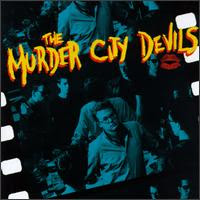 I always forget that I still have this record.

The year was 1999 or 2000, and I was still in college in Portland. I was taking a film class with an English professor I had taken a few Comparative Lit classes from, a guy who was - and still is - one of the better teachers I ever had the pleasure of being schooled by. The film class was a night course, and it was, unless I'm completely spacing something here, the easiest class I ever took at the college level. We watched movies, took a few quizzes that were a complete joke, and as long as we showed up, we were guaranteed an A. This dude just wanted somebody to watch movies with him and then discuss them for two solid hours afterward. We were happy to. The class was small, and as our final approached, our teacher decided to scrap whatever test was on the syllabus, instead opting to have us over to his apartment for a cocktail party, where we would view some Spanish film with subtitles and discuss it. I just heard "party."

These were the sort of things you imagine when you think about college - you may even hear stories about such events - but you never think you'll actually get to participate in such a thing. A party at your teacher's place for your final? I couldn't wait to check out the guy's book collection and see how this professor - who was also a lawyer in his spare time and had a notorious reputation for banging his students since he and his ex-wife, who was also in the English dept. divorced - lived.

The get-together was in the early evening, maybe on a Friday, and we were instructed to bring our own beverages. I showed up at his high-rise apartment in the West Hills with a six-pack of some Deschutes beer, and during the course of the short evening, while watching the film, talking with my classmates, and probably inappropriately ogling his astounding book collection (it was like a mini-library in his apartment, and he lived at least ten floors up - it was surreal), I cashed out at least five of 'em. Probably the whole sixer. I was "buzzing hard," as the kids like to say, when I left his place. I remember the teacher asking me if I was OK to drive, and I said that I was. I probably wasn't, but I didn't have far to go. The rock show that I had a single ticket to was less than ten blocks away.

The Supersuckers were playing at the Crystal Ballroom that night, and I don't remember if I couldn't find anyone to go with me, or if I didn't bother to try, or what the deal was. But I have rarely attended shows by myself, and I remember thinking it was a dicey idea. But I had no intentions of missing one of my favorite bands. And by that time, the amount of beer in my stomach not only convinced me that it didn't matter if I rolled solo, but that it might actually be a badass thing to do. Nothing was going to stop me from rocking! Or something sad like that.

The lineup for the show was Zeke, Supersuckers, and Murder City Devils, in that order. I had, of course, seen the Supersuckers many times, but I had never seen either of the other bands. I always heard people say that Zeke were awesome, but as I rolled in and they started up, I was not impressed. (They continue to suck.) Since I wasn't digging the music and I had no one to talk to, I hit the 21-and-over section and proceeded to get stupid, curing my boredom by chugging vodka and cranberry juice. By the time the Supersuckers came out, I was a mess. I stumbled out to the main floor, ran into this guy who worked in the meat department of the grocery store I worked at in Eugene (who I didn't really know that well), and spent the next half hour frantically mouthing the words to the Supersuckers songs, while taking breaks to yell in his ear and sloppily hit on his sister.

The rest of the evening is hazy, but I know that I stuck around for the Murder City Devils. You know how you can get so drunk that you can't even hear right? That was me. Swaying, toggling in and out of being blacked out, and thinking to myself that this band, despite the fact that I was seeing triple and could barely make out any discernible riffs, was blowing my fucking mind. I have flashes in my mind of this dude with glasses just screaming at the top of his lungs, and to this day, that's all I can really remember. And it was all I could really remember the next day, but I was still stuck with the idea that the band had just come in and slayed the entire place with their full-force rock assault. And maybe they did. And maybe everybody there was as loaded as I was. I really have barely any idea what happened that night after the Supersuckers left the stage. But I kept holding onto this idea that I liked it.

It wasn't until a few weeks later when I purchased this record that I realized - or maybe remembered - that I don't like this band at all. It's punk rock for hapless drunks, and that sort of shit just bores me to death. But that night, that hellish night, it might have made perfect sense to me.

And apparently I keep this record as some frightening reminder of how depressing that was.

"Dance Hall Music"
Posted by Wockenfuss at 1:16 AM

Oh boy, I miss those sorts of nights— a little. While I was not at this show, I feel like I've experienced pretty much the exact same evening. Oddly enough, myself and Biff had a film teacher that was somewhat similar.

I'd like to think my entry had something to do with this: http://www.kgw.com/news/Crystal-Ballroom-liquor-license-could-be-revoked-84206347.html

That was an excellent read. Honestly, I laughed at a few points. Well done sir. And yes, I did always wonder why you owned that record. God, booze can't even make Zeke sound good.