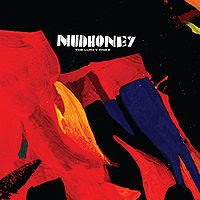 Wanna hear about what an idiot I am?

Mudhoney played a show in Portland last night and I didn't find out about it until today. I am unstoked. I heard it sold out really quick (it was in a tiny venue - double argh!), so maybe I wouldn't have been able to get in anyway, but it would have been the best topper to this Mudhoney spree we've been on! I am old, out of the loop, and really feeling like a dunce. I'm actually sort of embarrassed by how legitimately upset I am by this. I've been on a huge Mudhoney kick lately and I would have loved to have seen them.

Anyway. On with the entry at hand.

Like a lot of great bands who have stayed together longer than anyone expected, Mudhoney experimented with some shit, made some great albums while trying that new shit, and then returned to their bread and butter. This is the revival of raw-rock Mudhoney, a horn-less album that was recorded in a scant four days but doesn't sound rushed or compromised at all.

It's really great to hear the band get back to the guitars-and-a-little-bit-of-organ approach, and there's some really great songs on here. The title track is the only one of any notable length (4:52), and it features a sweet mini-drum-solo by Dan Peters, which will make you wonder why they never left room for that before. The reason I mention the length is to point out that the long jams are gone, with the band back to the ol' three-minute rock song.

"And the Shimmering Light" is a great example of this, a fairly mellow little ditty that features the band flirting with pop, but kind of in the way they did on "Good Enough" in 1991. It's great. The rest of the record mostly sticks to the rock, and like I said, it's damn nice to hear the band do the no-frills thing. The songs are solid, and they'll grow on you. The LP comes with a bonus 7" that includes two cover songs, one by Pere Ubu ("Street Waves") and one by The Troggs ("Gonna Make You Mine"). Not often that Mudhoney does covers, so that's cool to have.

I'm pretty excited about this record right now, mostly because it's their newest one. I sometimes whine about all the bands I love breaking up, but I've never been able to add Mudhoney to that list, and that's a great thing. Now I just need to keep better track of their touring schedule.

"The Lucky Ones"
Posted by Wockenfuss at 1:04 AM