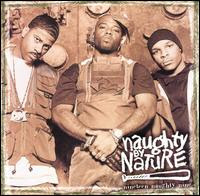 I can't act like I'm crazy-familiar with this album, because it's the one Naughty album that I've probably spent the least amount of time with. I haven't listened to it in a while, but going back and revisiting it now, it's coming on pretty strong. The group sounds a little bit harder on this one, and though the beats are very late-90's, they could be worse.

By this point the group was giving in to the demands of rap at the time: there's feature spots from Big Pun, Mystikal, Krayzie Bone, Silkk the Shocker, and Master P. I guess no one could have known how much that would instantly date this thing, but it certainly does. And the beats, while hard-hitting, also sound pretty dated.

But, Treach is firing back on this one, and he single-handedly takes some songs that aren't especially memorable music-wise and lyrically wrecks shit all over them. Maybe not the comeback that he was hoping for, but it's not far from it. And Vin Rock, as usual, sounds mad enthused.

The radio song on this one is "Jamboree," which is easily my least favorite radio jam of theirs. But it was still a hit, so they accomplished their mission. And they left out the shout-out song on this one, which is a plus. But they were getting guest-spot happy, and that's always dangerous ground to tread on. It would come to a head on their next release.

"Dirt All By My Lonely"
Posted by Wockenfuss at 2:29 AM

I struggle with this album. I want to like it but Naughty does everything to throw a monkey wrench into my plans. Before I understood the deal that they would throw a few radio jams on an album. On this one they seem to be almost begging for a radio hit. And here they do it by pandering to the flavors of the time and what results is uneven and somewhat confusing album. Is it hard? Radio-friendly? R&B? Dirty South? Don't worry: everything's here! This album is a great example of one of the most confounding trends amongst rappers in the last decade. The need to put every genre of music on your album with the hopes that all of those different audiences will buy your album. If this works why don't all genres do this? Why don't The Foo Fighters throw a country song, a punk song, a buttrock song, and a metal song on their album? Because it's a stupid idea, that's why. I listen to Naughty By Nature because I don't want to listen to crunk music. I don't see why more rappers don't see this simple point. "Ring The Alarm" and "On The Run" are the strongest songs here for me.