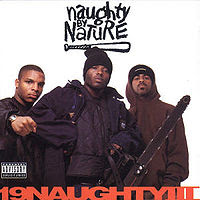 I cannot remember what possessed me to buy this cassette around the time it came out. I had not particularly been a fan of "O.P.P.," though I did like it - but I never bought the group's first record. I seriously think - and I have some weird memory of this - that I just thought the fact that Treach was holding a chainsaw on the cover of the album was so simultaneously badass/ridiculous/hilarious that I had to see what these dudes were up to. I've always been glad that I took the leap.

And, of course, I can't find a full version of the song anywhere. That is fantastic. Anyway, trust me: it's awesome. And it's a tone-setter for what would easily be the group's best album. This time around, the radio single was "Hip Hop Hooray," and again, MTV played the shit out of it. And again, it's one of the weaker songs on the album. The other two spotty-ish tracks are "Written On Ya Kitten," Treach's pussy-wranglin' anthem, and the seven-minute shout-out number, "Sleepwalkin' II." Luckily, these are both at the end of the album, so they don't really get in the way. Other than those, this thing is a go-getter.

Tracks like "Daddy Was A Street Corner" and "Sleepin' On Jersey" are uptempo, frantic, and just incredibly awesome. The whole group apparently doubled their skills between their debut and this album, and it's clear they're not interested in dicking around. Kay Gee's beats are less repetitive, more complex, and are just generally more well-crafted. Vin Rock sounds fully comfortable on the mic, and his verses throughout (though I always wish there were more) are solid. But this is Treach's album. The guy is out of his head on this thing, and I'm not sure if he ever really got the recognition he deserved for his performance on this album. It's just nuts. "Ready for Dem," "Take It to Ya Face," "The Hood Comes First" - he slays 'em all. And when he teams up with Freddie Foxxx for "Hot Potato," it's fantastic.

So look past "Hip Hop Hooray" and see this thing for what it really is: one of the finest hip hop albums of the 90's. And the high point of the group.

I'm about to throw a lot of hyperbole around so get ready. This album is usually kicking around in my top 10 favorite hip hop albums of all time. Treach's performance on this thing is one of the greatest MC performances of all time. I mean, words cannot describe just how incredibly good he is here. This album is 17 years later and I still discover new lines, genius wordplay and creative similes every time I listen to it. What makes it even more astounding is that Treach put this display on in 1993. Now '93 was a great year for rap but Treach is simply in a different league on this thing. I definitely agree with you that their skills doubled between their first and second albums. Part of me feels bad Treach's performance here seems to go completely unnoticed. I wonder if that has to do with their penchant for radio jams, although he doesn't really tone down his skills on "Hip Hop Hooray" so who knows. I would list my favorites but they are all pretty much incredible (except for the ones you pointed out). I will say that the title track is one of the greatest rap songs ever recorded (there's that hyperbole again). And "Hot Potato"?Don't even get me started. Goodness, I love this album.

Funny side note: I always thought it was odd that they began side 2 with a way too long skit about Kay Gee creating some super sweet beat. Why is this odd? Because it is easily his most boring beat on the whole album.

I too have no clue why you bought this. I even remember at the time being a little ashamed of the fact that I loved an album by Naughty By Nature. The chainsaw cover is pretty ridiculous.