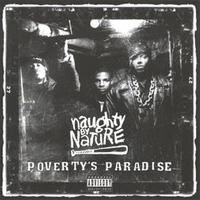 Naughty might have gotten a little ahead of themselves with this one. There's too many skits (there's two intros, for cryin' out loud), beats that are frustratingly smoother than any of their stuff up to this point, and just a general feel that suggests they were stuck between radio friendliness and street credibility. It's really just one of those post-fame awkward albums.

That's not to say it's bad, because it's not. But I've just never been able to dive into it the way I've been able to with their first two albums. Treach sounds more deliberate (you can actually understand most of what he's saying...!) and, at the risk of tossing out a hip hop cliche, the group just doesn't sound as hungry. Tracks like "Holdin' Fort" and "Sunshine" sound a bit lazy, and though they work some decent grooves, I've always enjoyed Naughty By Nature more for their all-out freneticism than their mid-tempo soul-type jams.

Still, tracks like "Respect Due" and "Craziest" are pretty dope. But most of this thing is just so noticeably slowed down that I spend most of my time listening to it in a lull that I keep thinking the album's going to bust me out of, but it never really happens. "Feel Me Flow" is the radio single on this one, and they also include another seven-minute shout out at the end. Sadly, those are the only things that follow the Naughty formula on this one. Maybe they felt that they were growing up, or maybe they were trying to shift shit in a new direction. And I appreciate that. But there's just not enough of the old shit left over in this one for me.

The first thing that I always think about when I see this album is "how did this beat Ol' Dirty Bastard for a Grammy?" Now, I could give a rat's ass about the Grammies but for '95, this album just doesn't get it done. I always want this one to be so much better. Sadly it's simply okay. It's not bad, it's just not great. Thank goodness that iTunes magic whittles this thing down to a consumable 14 songs because otherwise it is a bloated mess. When I want to enjoy this album I simply listen to their follow up because that thing makes this one sound pretty good.