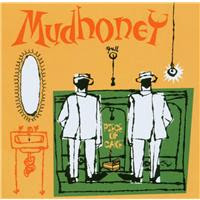 This was to be Mudhoney's big push, their major label debut that would catapult them to grunge superstardom. The time was right, the band was ready, and then... It didn't happen. Which just goes back to what I was saying in one of my earlier posts. I don't think Mudhoney ever had a chance of making it big.

This album, while arguably not quite as good as Every Good Boy Deserves Fudge, is a great record. A fantastic record. Possibly my favorite Mudhoney record. And I think it still remains sorely underrated. I was just re-reading the Rolling Stone review written around the time the record came out, and if this dude's review was any indication of how the masses saw Mudhoney, they were fucked. The reviewer missed the point completely, and seemed to somehow scold the band for - gasp! - becoming ambitious.

And maybe that's why this album didn't resonate with people as much as it should have. It's not EGBDF part 2. It's Mudhoney, for the first time, expanding their sound and taking advantage of (what I assume to be) higher-quality studios. Or at least more time in the studio. These songs, while not outwardly complex, are really a step forward for the band, both musically and lyrically. Not that they lost their sense of humor - it's just more subtle, for the most part. (The exceptions being the interludes with the fart sounds.)

I bought this album right when it came out, and I was singing its praises to anyone who would listen. And I feel like people liked it, but maybe they were still looking to Mudhoney for "Touch Me I'm Sick"-type songs, and tracks like "Blinding Sun" and "Make it Now," which were more rooted in the four-minute rock song sort of form, just didn't give the immediate satisfaction they were looking for. (And whoever thought Mark Arm would use the word "countenance" in a Mudhoney song?) I actually liked the fact that this record - or at least parts of it - didn't grab me immediately. They grew on me, and because of that, this album is one I've listened to hundreds of times and never grown tired of.

And I don't mean to put too much emphasis on my "It's a whole new Mudhoney!" point. The band still cranked out songs wouldn't have been out of place on their previous record. "Suck You Dry," "Living Wreck," "Ritzville," and "No End in Sight" are all fast, ragged, and completely awesome.

The band must have been slightly pissed when this thing didn't connect the way they thought it would. Or maybe they didn't give a shit. That's what I'd like to think.

Another sweet thing about this release: The alternate cassette cover.

I really need to get this on vinyl...

"Blinding Sun"
Posted by Wockenfuss at 1:23 AM

You know, this album is odd. I know I loved it when it came out. For some odd reason though, it has not aged as well as some of their other work for me. Some songs that I know I loved don't really do it for me. I think I am one of those people who was taken aback by the more serious side of Mudhoney (if you want to call it that). Honestly, most of side 2 of this thing sounds phoned in to me. All in all though, I never tire of "No End In Sight," "Ritzville," "Suck You Dry," or "Blinding Sun." Songs like "I'm Spun" and "Take Me There," however, never quite come off to me. Like I said though, I know I loved this when it came out and parts of it certainly sounded like a huge step forward to me at the time. I too wonder if they were surprised or not when this thing didn't take the world by storm. By what I have read I think they found their whole situation pretty ridiculous so I would lean towards that they were just enjoying it while it lasted. The farts lead me to believe that anyways.