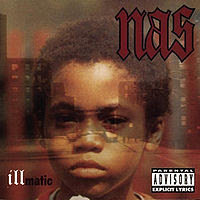 I missed the boat on this one the first time around, and really didn't even hear it until a few years ago. By that time, I had heard so much about it that I didn't even feel I could form a logical opinion about it. People have had their lips on the nuts of this album - really locked on there - for so long, that there is no perspective anymore.

Of course, that isn't to say that Nas is in the same league (as far as I'm concerned) as those go-to, knee-jerk artists who everybody defers to out of fear of reprisal. (I mean, seriously. Lil Wayne is the best rapper alive? Then we're in big fucking trouble, people.) Well, let me rephrase that. He is in that same league, because he will always get the finger pointed in his direction when the pointless "best lyricist" argument comes up. But, I'd argue - and this is where the "as far as I'm concerned" part comes in - that he's got a better head on his shoulders than most of the other rappers he gets lumped in with. I'm not a huge fan, but I dig some of his music. I think mostly I dig this album. I tried some of the other shit and it didn't sit as well with me.

Anyway. I thought Nas's verse on "Verbal Intercourse" on Raekwon's Only Built 4 Cuban Linx... was solid. So I thought I'd check this album out. And you know what? It's really good. And isn't that enough? One of the greatest hip hop albums of all time? Depends on how long your list is. The fact that this thing is consistently ranked in the top five in lists like that is a bit weird to me. And don't get me wrong: it is a fine album. Sure: a great album. It's also only got nine actual songs on it and is less than forty minutes long.

Maybe I just don't get it. Maybe I'll never get it. I dunno. But I'll hold onto this CD. Because I do like it. And because I feel like I should. That's a bad reason.

"The World Is Yours"
Posted by Wockenfuss at 1:43 AM