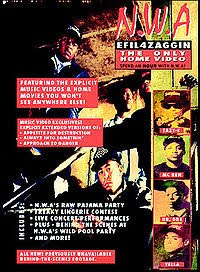 I remember knowing that this was out on VHS when it was first released, but I either never saw it in a store or didn't want to shell out twenty bucks to see it. The DVD came around in 2003, and that's when I ended up with a copy.

Clocking in at less than an hour, this thing isn't a whole lot more than decently-edited amateur (seems Eazy shot a bunch of it) home video footage, with the bonus addition of three uncensored videos for "Appetite for Destruction," "Alwayz Into Somethin'," and "Approach to Danger." There's little bits of interviews, behind-the-scenes tour footage, and just all sorts of random shit. The little bits of concert footage end up being the best parts. N.W.A shows were rare, so it's pretty cool to see some actual film of the shit going down, even it's from a single camera that seems to be in a balcony.

The music videos are a weird bunch. "Appetite for Destruction" features a strangely edited version of the song, and though it contains the same verses as the album version, there's a start-and-stop thing that goes on with it that's distracting. But seeing the dudes dressed up as Capone-era gangsters is hilarious. Easily their highest-budget video.

"Alwayz Into Somethin'" is a little less polished, featuring the group kicking it, for the most part, on the street. There's a little bit of bullet hole trickery and some jail shit that doesn't really work. And watching rasta dude Admiral D spit his tongue-twisters is even more annoying than just listening to him.

The video for "Approach to Danger" seems to be unintentional, like they just cobbled together some footage of them dicking around and tried to fancily splice it. It's not terrible, but it doesn't make a whole lot of sense.

Like I said, the rest of the video is just shaky handheld footage of the group. The stuff in the studio is cool to see, but the relatively long-ass segments that take place at the group's pool and pajama parties (!) are really depressing for some reason. The wet t-shirt contests, the gaggles of drunk hangers-on, Dre fondling ass; it just doesn't work.

Neither does the Ice Cube-dissing skit they try to pull off, which lasts way too long. But if you're a hardcore N.W.A fan, this thing is worth seeing, if only to watch the scene where Dre and Eazy argue over the structure of a track they're working on. The look on Dre's face is priceless.

"Approach to Danger"/End Credits
Posted by Wockenfuss at 1:14 AM