I Get A New Record Shelf. 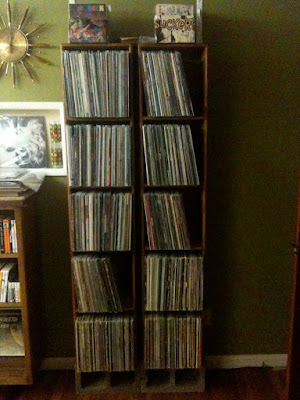 There comes a time in every record collector's life when he outgrows his allotted shelf space. This is both exciting and troubling, or at least it is for me. My wife and I just moved into a new house, and I had everything situated according to my then-current two-shelf system. But as you can see from the top photo, shit was starting to get a little cramped in my shelving, especially in the three compartments on the top left, the two on the bottom, and the one second from the bottom on the right.

Here's how I had my records organized: 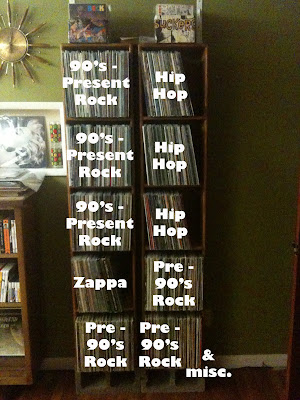 Those dates aren't completely accurate, but they're pretty close.

So, I made the executive decision, as I was having trouble getting one of my new records to fit on the shelf after returning from the record show a few weeks back, that is was time to get myself some new space. Luckily, I determined that I had enough room on the right of the two shelves to fit another one, though it would render the wall outlet (which you can barely see in the picture) obscured and unusable. This is the price you pay.

So. These record shelves rule, and I will accept no substitute. They are slightly expensive, but worth every penny. If the guy who makes these things dies, I'm fucked. I should probably buy one more just to be safe. But I won't. Since you are my friends, I will tell you where to get them, while also mentioning that they come in various sizes, this one being the tallest. You can also buy individual cubes and ones with two or three (and maybe four?) compartments. The only place to get them - or the only place I've ever seen them - is at Periodicals Paradise at 1928 NE 42nd, just north of Sandy.

I headed there on Superbowl Sunday, which is officially the best day of the year to go shopping because the shops are dead, and got the last one of the five-shelvers. They come "natural" when you get them (just raw wood), which is how I kept mine for a long time, but my wife insisted I stain them when we bought a house, so stain them I did. And stain this new one I had to, to make sure it matched. After lodging it in the trunk of my car and getting it home without incident, I propped it up in the garage, slapped on a coat of stain or varnish or whatever that shit is, and left it out there for a few hours with two fans pointed at it. I was antsy. Some hours later I hit the outside with another coat, let the fans do their work, and by late that night, I dragged the thing inside.

I keep my shelves propped up on cinder blocks, because I am paranoid about flooding, spilled drinks, or someone kicking my records. And it raises up the bottom shelf a little, which makes it easier to get to. Here's how the new shelf looked when I put it in place: 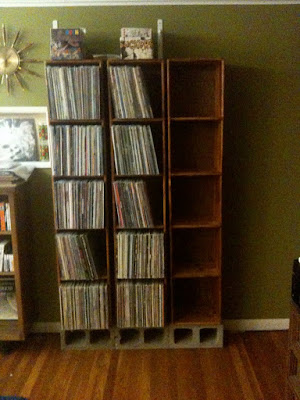 Sharp. I have to attach the shelves to the wall with brackets, both to make sure they don't tip over, and to assure that they're somewhat flush with the wall so they don't look wonky. You can see those white bars on top of the two shelves on the left; those are the brackets. Here's a different angle of the new one I put in: 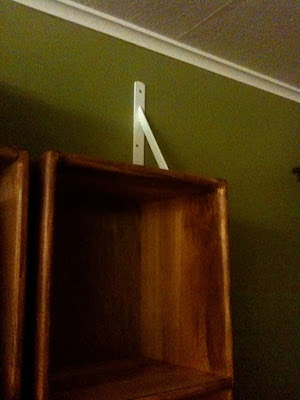 Boom. The new shelf was stained, up, and securely fastened to the wall. Now for the fun part: reorganizing. After I worked my magic, here's what I came up with: 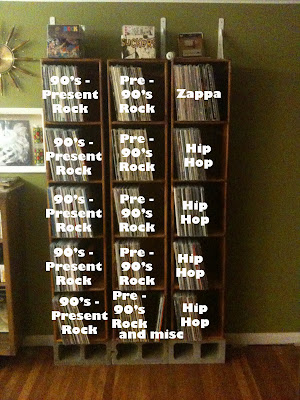 I like what I've done, and there's plenty of room for expansion. And I think it makes my collection look bigger, which is a plus. Big day for me.
Posted by Wockenfuss at 1:37 AM