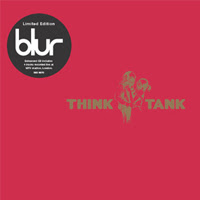 I could have sworn I had a Blondie record. If you're out there and you have my Parallel Lines LP, you can keep it. I never really listened to it anyway.

This is the only Blur album I own. I really like this CD, and I like pretty much everything I've heard by the band. I just haven't ever taken the time to get into their stuff. I loved "There's No Other Way" when I was in high school, and I'm sure that was the first song I heard of theirs. Still a great song. Still never picked up Leisure. I think it's too late. I had a boner for Madchester-ish bands for a short time in the early 90's. That was my window. Blur missed it.

Yet, at some point in 2003, Blur dropped this CD, I heard a bit of it, I dug their "hot new sound," and I ended up with it. Pretty sure it was a gift (that would explain the "special edition," which is basically a little red bound book), but it was a gift I certainly asked for and welcomed with open arms. This is the last Blur album, and it definitely doesn't sound like their other releases, though, like I said, I'm not the authority on those. It's a lot of electronic mish-mash, with melodies playing the other big part in the songs.

The biggest reason I love this CD is track two: "Out of Time." It's made its way onto many a mixtape and found itself always on my iPod. To me, it feels a bit like Blur trying to sound like Radiohead (it's almost excessively intricate with stuff that is tucked way in the back of the mix), but it's far from a copycat track or a simple emulation of a style. Damon Albarn's vocals are eerie but not downtrodden, and the melody is just a killer. The lyrics keep it simple, but I'm not sure it would even matter what he's singing. Just a great, great song.

It's followed by "Crazy Beat," which is more like "Song 2" style Blur than anything else on the album. Fun times. There's some other tracks like this, more dance-y than pensive, but its the slower ones that seem more effective to me. "Caravan" is an odd one, and it gets a bit tedious in parts, but once it falls into the chorus, it's a great little song. A lot of the record seems to be alluding to a 1984-type scenario, and I think we've all heard enough of that. But I suppose there are worse things to focus on.

I guess I should probably listen to Gorillaz at some point. Eh, that sounds like a whole big thing.

"Out of Time" Live on Letterman
Posted by Wockenfuss at 11:11 PM