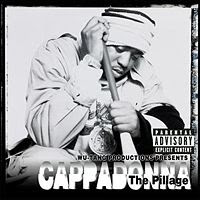 People started turning their back on Wu-Tang before they actually started showing chinks in their armor. If you ever want proof of how finicky (and basically dumb) the general public is, take a listen to Wu-Tang Forever. This was the album where most folks began to sour on the Clan and their affiliates. Meanwhile, it's fucking genius. But, when the hype fizzled quickly after its release, the rest of the Wu were forced, once again, to prove themselves.

Cappadonna, barely an "official" member of the Wu by the time Forever was released, had featured prominently on Ghostface's Ironman and Raekwon's magnum opus Only Built 4 Cuban Linx.... It was clear he could hold his own. But, waiting to put out his debut in the wake of Wu-Tang Forever's perceived backlash might have hurt his chances for solo stardom. I was so happy to hear this record and realize commercial potential was never his goal. This is an unapologetic and sharply smart hip hop record, one of the last truly great Wu-affiliated releases. And, of course, nobody really gave a shit.

No skits, no bullshit. This is front-to-back rapping, with Cappa's unique style finally able to sprawl out over full tracks instead of being constrained to the 24 bar verses which were clearly not enough for him. (We all remember "Winter Warz," don't we?) Turns out, while he might not be the most traditional songwriter, he's got a way of putting a track together. "Slang Editorial" is not only a sweet song title, it's a sweet song, and a great one to open with. He lays the ground work, keeping the words packed tight over a great beat. And it goes from there.

I could talk about every song on this one, but I don't have the time. But, I'll tell you why this one works as an album: there's plenty of guest spots, but they're divided up well, they're all Wu guys (some more loosely related than others), and none of them suck. Also, the record manages to get better as it goes along. This thing's not front-loaded. "Everything is Everything," which features one of the most nonsensical hooks ever (and that's saying a lot for a guy who hangs with Ghostface), is one of my favorite songs, and it's buried near the end.

Maybe this record is more popular than I realize. I know "Run" made it onto a few soundtracks, and I'm assuming "Dart Throwing" got some play that summer. (If it didn't, there is truly no justice in the world.) But, I know when the bro and I went to see Cappadonna some years back in downtown Portland, it wasn't a packed house. He's got an interesting style of speak. Maybe it didn't work for some people. It worked for me. I had a dub of this in my car for three years and it never stopped working for me. If you ever hear him singing on "Young Hearts," you'll understand the appeal.

I could go on and on about how much I love this record, but I won't. All I will say is that there is not one bad song here, which is something that you can't say about most 16 song rap albums. Even "Young Hearts," which should be bad, is somehow one of the best songs on the record. Cappa has his own style, whether he knows it or not, and that is what makes him great. If this would have been released in '96 it would be regarded as classic Wu right along with the first 5 solo albums. Oh Donna. Oh Donna.